In tonight's episode, Antara reveals that she has returned to be with AJ which makes Guddan an outsider. 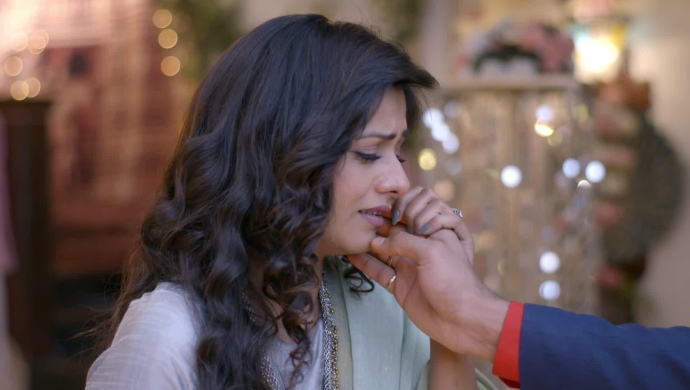 In the previous episode of Guddan Tumse Na Ho Payega, Guddan doesn’t AJ to come near her. AJ notices that Guddan’s sari is losing it’s blue colour. AJ pushes Guddan into the pool and finds that Guddan’s blue sari changes to red. AJ realises that Guddan actually wore the sari he gave her and that she loves him too. Guddan and AJ go back to the party to complete the engagement ceremony. However, they stop when Antara walks in through the door.

In tonight’s episode, Antara enters the house and sees everyone shocked. Lakshmi thinks she is a ghost, but Antara tells AJ she is not a ghost. She asks AJ to touch her so he knows for sure she is not a ghost. AJ is shocked when he touches Antara and realises she is alive. Antara says that she has returned because of AJ’s love.

She tells Daadi that she has forgiven Angad for trying to kill her. She even holds AJ’s hand while she recounts the story of the accident, which she supposedly died in. AJ cries hearing about Antara’s story. Antara’s doctor tells AJ that Antara was in a coma after the accident. They couldn’t contact any family because Antara was unable to speak.

He also mentions that Antara fought with death to be with AJ. As Antara is speaking the ring falls from AJ’s hand. She wants to find out who’s engagement it was. Daadi asks all the guests to leave without answering the question. Guddan’s father tries telling Antara that Guddan was marrying AJ, but before he finishes, Antara faints.

AJ takes Antara in a different room to take care of her. Durga and Saraswati celebrate Guddan’s life being ruined. Guddan goes to find answers from AJ, Guddan’s father asks for clarity on what happens to Guddan and AJ’s marriage. Daadi refuses to give any answer on Guddan’s future yet.

Guddan goes to get answers from AJ. Guddan tries to talk to AJ but sees him busy taking care of Antara. She takes him to another room and tells him that she wants to call off their engagement. Will Guddan take herself out of AJ’s life? Stay tuned to find out.