Durga convinces Angad that she is not the mastermind behind AJ-Guddan's marital problems. 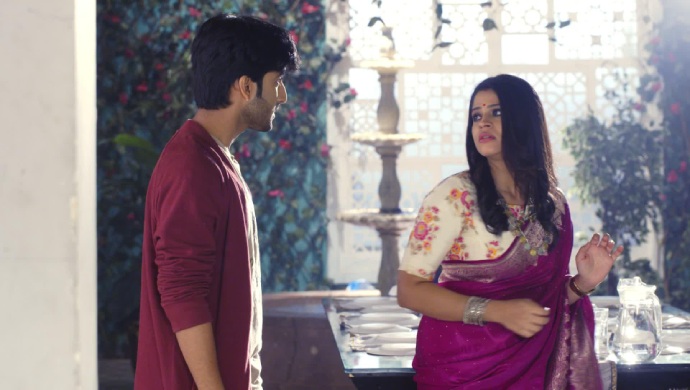 In the previous episode of Guddan Tumse Na Ho Payega, AJ goes to rescue Angad after Rocky kidnaps him. Guddan escapes from the room AJ locked her in to keep her safe. She goes to meet AJ and calls the police to the scene too. They send Rocky to jail and bring Angad back home. When AJ returns he puts the mangalsutra around Guddan’s neck and re-marries her.

In tonight’s episode, AJ renews his promises to Guddan. He remembers the old and mean marriage promises he made to Guddan. This time he makes new promises of love and trust with her. Guddan is happy to have finally won AJ’s trust and respect. AJ then turns to Angad asking him if her truly repents for his actions. Angad says that he does.

AJ then asks Angad to point out the real mastermind who convinced him to do such horrible things. Angad initially points towards Durga. AJ is about to confront Durga when Angad stops him. He tells AJ that the real person who was behind everything wrong is Saraswati, not Durga. Daddi then slaps Saraswati and asks her to leave the house at that very moment.

Saraswati is shocked but realizes that Durga has somehow managed to convince Angad that she is not the real evil. Angad later tells Durga that she doesn’t have to follow Saraswati’s evil plans after she is made to leave the house.

Durga thanks Angad for exposing Saraswati. Later she goes to Saraswati and promises to make thing right. She asks Saraswati to pretend to cry while leaving the house. Angad calls up the mental rehabilitation centre to get admitted again. Seeing this Guddan tells him to stop. She asks Angad to live with family and truly make up for everything wrong he did instead of just leaving.

AJ also agrees with Guddan’s decision, since Angad’s mental illness was used against him. Later when Saraswati is leaving too, Guddan decides to stop her. After seeing Saraswati crying and begging for forgiveness Guddan’s heart melts and she asks AJ and Daadi to let Saraswati to stay at home. AJ gives in to Guddan’s wishes.

Durga, meanwhile, looks satisfied that her truth didn’t come out in the open. Will she try and cause problems in AJ and Guddan’s marriage again? Stay tuned to find out.

Kritika Kamra Wants To Kill Her Ex-Boyfriend Karan Kundra, Find Out Why