Guddan makes Shanti Bua say sorry to Daadi who is older and more important and is still mistreated by Shanti bua. 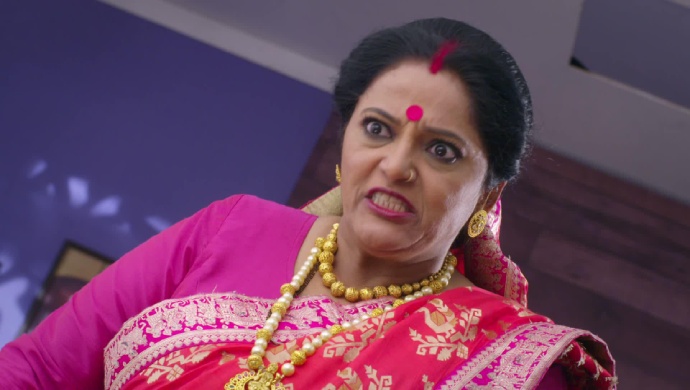 In the previous episode of Guddan Tumse Na Ho Payega, Guddan returns to Jindal Bhavan. She takes on the role of a strict saas. She demands that her bahus respect and fear her. She threatens to throw Durga out of the house if she disobeys her orders. Guddan also punishes Durga and Saraswati by making them handle all the house work themselves. Later, she tells AJ she hates doing all of this. AJ says that he supports Guddan.

In tonight’s episode, Durga and Saraswati are standing in Shanti Bua’s room. Shanti Bua is angry at Guddan returning and teaching Guddan her own methods. Guddan even makes Shanti Bua repect Daadi who is elder to her. Shanti Bua’s ego is hurt and she herself plans to teach Guddan a lesson.

The next morning Guddan ensures the morning puja goes smoothly. Then, she too continue with her act of being a strict saas. Saraswati bahu is drowning in accounts and numbers, while Durga is swamped with cleaning and cooking. Later Guddan even stops them from sitting at the lunch table with her. She insults the food and punishes them.

Later Guddan is setting up a tent because she and AJ both have promised to not go back to their room. They both have decide to stay out of their room till they don’t find Durga’s attacker. AJ sees Guddan mess up while making the tent and saves her from the falling tent.

Guddan aks AJ why he is not helping her set up the tent. AJ tells her that he is looking through the cctc footage to find out who tried to attack Durga. Guddan also goes to see the footage and notices someone wearing a sari similar to hers going to the storeroom. Will this help her find Durga’s attacker? stay tuned to find out.