Guddan threatens to further punish Durga and Saraswati. Shanti Bua decides to help them to save her reputation. 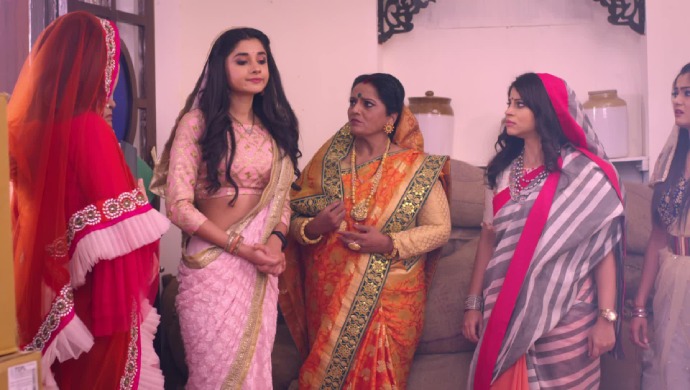 In the previous episode of Guddan Tumse Na Ho Payega, Guddan angers Shanti Bua. She makes Shanti Bua apologise to Daadi who is older and more important in the family. Later Guddan continues to be strict with her bahus. She insults their cooking and punishes them by making them grind 10 kilo of wheat into atta. AJ tells Guddan that he is looking at the CCTv footage to find out who attacked Durga. Guddan joins him to find out the real attacker.

In tonight’s episode, AJ and Guddan are watching the footage. Guddan and AJ find someone wearing a sari like Guddan’s and walking towards a room. Guddan tells AJ that it is not her. AJ knows that and believes her. Just then in the garden on the opposite side of the pool, someone drops a flower pot.

AJ walks there to look for the person but doesn’t see anyone. They assume it fell because of the wind and let it be. Guddan then offers to help AJ investigate. But he tells her to focus on dealing with Shanti Bua, Durga and Saraswati. Guddan goes to check on Durga and Saraswati and finds them lagging behind.

Guddan says she will punish them further if they don’t finish the work on time. Hearing this, Shanti Bua also begins helping Durga and Saraswati to ensure Guddan can’t point fingers at her. Daadi and Lakshmi are surprised seeing Shanti Bua work. Meanwhile someone is seen burning the pallu of a sari, earlier seen in the video footage.

Revathi is refusing the drink haldi milk made by her mother. Angad shows up and convinces Revathi to drink the milk. Parv sees this and knocks the glass form her hand. He stops Angad from being with Revathi. However, Revathi claims that Angad is more than her friend, and that she loves him. Angad is happy and says that he loves Revathi too.

Guddan finds Shanti bua, Durga and Saraswati all sleeping. She says that they managed to grind 2 sacks of wheat into atta. In fact, they had done only one sack and Guddan helped them out by secretly grinding another sack with Lakshmi’s help. Shanti is happy to succeed and hugs Durga and Saraswati.

Guddan says that they worked as ‘friends’ and completed their task. She even tells AJ later that Shanti Bua used the method of friendship. AJ says he is proud of Guddan but he wasn’t able to find any clues about the clothes.. Will they manage to catch the culprit? Stay tuned to find out.