Guddan tells Shanti Bua the truth and tries to tell her that her methods are wrong. 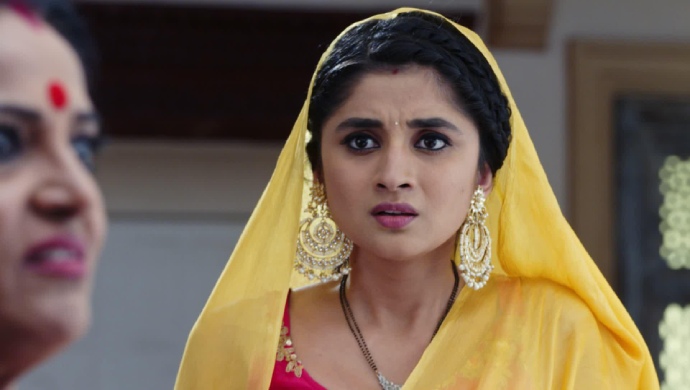 In the previous episode of Guddan Tumse Na Ho Payega, Guddan convinces Shanti Didi that she is the perfect saas. She pretend to be a strict and stern disciplinarian to Durga, Lakshmi and Saraswati. This is the right way to control your bahus according to Shanti Didi. She even praises Guddan in front of AJ. Guddan is unhappy to be lying to Shanti Bua about being an ideal saas.

In tonight’s episode, Guddan is speaking to Shanti Bua who is pleased with her qualities as a saas. However, she wants to test Guddan’s ability as a chef. She asks Guddan to prepare an Indori Thali for her. Guddan is terrified since she doesn’t know how to cook. However to please Shanti Bua she agrees to do so.

Durga bahu sits at the same table and Guddan. Shaanti Bua insults her and asks her to sit near Guddan’s feet and maasage them. Guddan feels uncomfortable to see this happen. She says that she needs to prepare the Indori Thali and leaves.

Meanwhile, Daadi has already tolkd AJ to get an Indori Thali from his restaurant. Guddan is unhappy to take the credit for the dish. AJ comforts Guddan and tells her that she can handle everything now. She is no longer the person who keeps making mistakes. This time AJ is with her.

Guddan serves the Indori Thali from the restaurant to Shanti Bua. After tasting every dish Shanti Bua praises Guddan’s cooking and skills. Guddan refuses to take these compliments that she doesn’t deserve. She goes back to the kitchen and brings out the Indori Thali that she made herself.

This thali is badly made and not up to the mark. Guddan tells Shanti Bua the whole truth which makes Shanti Bua very angry. She scolds Guddan for using lies to try and fool her. Guddan tells her that everyone lied to her because they are afraid of her.

Guddan says that it is better to be friends with your bahus rather than scaring and insulting them. Shanti Bua disagrees. Shanti Bua challenges Guddan to prove her wrong in two days or she won’t leave the house. Will Guddan succeed in proving Stanti Bua wrong? stay tuned to find out.

5 Pictures Of Antonio Verghese From Poison That Will Make You Go 'Such Sass, Much Wow'