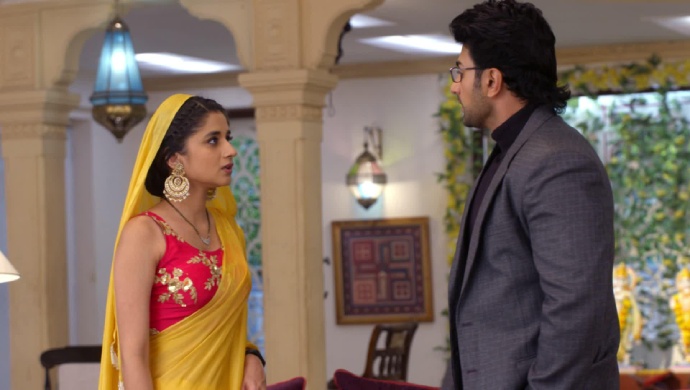 In the previous episode of Guddan Tumse Na Ho Payega, Shanti Bua is pleased with Guddan’s way of being strict with her bahus. She decides to test Guddan’s cooking skills by asking her to make a Indori Thali. AJ brings the Indori Thali from his restaurant. Bua likes the Thali and praises Guddan’s cooking. Guddan feels guilty for taking the praise. She tells Shanti Bua the whole truth. Shanti Bua challenges Guddan to prove who is better at dealing with their bahus.

In tonight’s episode, Durga scolds Guddan for telling the truth to Shanti Bua. She tells Guddan that there was no need to tell Shanti Bua about anything. But now if Guddan can’t prove Shanti Bua wrong in two days, then Shanti Bua has vowed to stay in the Jindal house with the rest of the family.

Guddan says that she needs to show Shanti Bua that her ways are wrong. Daadi tells Guddan that Shanti Bua is old and it will be hard to change her mind at that age. Durga leaves in anger and goes to Shanti Bua. Guddan is left with Daadi and Lakshmi bahu. She tells them both that if they are on her side, she can prove Shanti Bua wrong.

Durga tells Shanti Bua that she agrees with her methods of dealing with bahus. Shanti Bua is happy to know that someone is against Guddan. Durga says that she has always been trying to improve Guddan. But now with Shanti Bua’s help she will finally be successful.

AJ’s restaurant is forced to shut the next day because some group has called for a strike. AJ is upset because he had planned to feed over 500 kids Aamras the next day. Guddan sees him upset and says they will make Aamras for the 500 kids at home itself.

Shanti Bua hears this idea and decides to make it a challenge between her and Guddan. She chooses Durga in her team and Lakshmi for Guddan’s team. Each team will make Aamras for 250 kids and the team that finishes first and makes the best Aamras wins.

Guddan doesn’t want to mix the charity work with this challenge. But AJ steps in and decides that Shanti Bua’s idea is correct. Later he tells Guddan that he knows she will succeed, because he trusts in her. Guddan feels confident of her chances.

On the day of the competition, Durga has coated all of Guddan’s mangoes with oil. Guddan and Lakshmi are having a tough time peeling the mangoes. Will Guddan succeed in this challenge? Stay tuned to find out.