In tonight's episode, AJ signs and hands over all his property to Guddan and decides to leave the house with Antara. 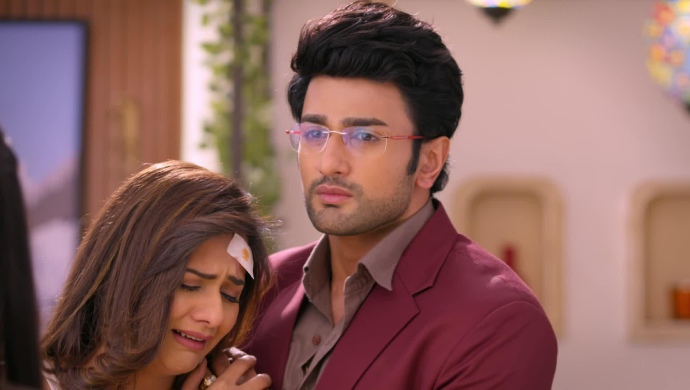 In the previous episode of Guddan Tumse Na Ho Payega, Guddan asks Antara to pay for the food she eats. AJ tries to stop Guddan by paying money from his own pocket. Guddan refuses his money and instead takes the family jewelry Antara was wearing instead. Saraswati finds out that Antara is only faking her pregnancy. She offers to join Antara if she signs a document splitting the Jindal fortune with Saraswati. Guddan gets a call saying the real pregnancy reports are ready.

In tonight’s episode, Guddan collects the pregnancy reports which prove Antara is lying. She reaches home where she bumps into Saraswati and drops the result. Guddan picks up the report and climbs the stairs to show AJ the reports. Antara stops Guddan at the top of the stairs and tries to take the reports out of her hand.

When AJ and the family gather around the stairs, Antara pretends Guddan pushed her. She falls down the stairs and gets wounds on her head. Guddan rushes to show the family the pregnancy reports. However, Saraswati mixed up the reports when she bumped into Guddan. So Daadi sees reports which show Antara is pregnant.

Daadi slaps Guddan and tells her to not speak another word. Antara’s doctor shows up and says that Antara and her kid are in danger. AJ lets the doctor treat Antara. He tells Guddan that loving her was his biggest mistake. AJ tells Guddan if anything happens to Antara and Guddan then he will do ruin Guddan’s life too.

Antara refuses to let the doctor treat her. She pays the doctor money to say that the kid has died. Antara pretends to be destroyed by the news of her child’s death. She yells at Guddan for killing her kid. Hearing that Antara lost her kid AJ gets angry. He signs a document handing over all his property to Guddan.

Antara is shocked with AJ’s reaction but doesn’t say anything yet. AJ decides to leave the house with Antara which makes Guddan very unhappy. Daadi also decides to leave with AJ. Saraswati is upset seeing Guddan get all the money and Antara leaving. How will Antara react on losing all the money to Guddan? Stay tuned to find out.