In tonight's episode, Antara asks AJ to tie a mangalsutra around her neck, AJ breaks the mangalsutra while putting it on Antara. 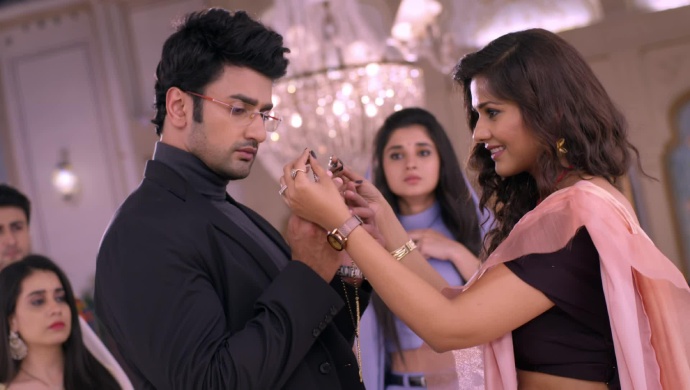 In the previous episode of Guddan Tumse Na Ho Payega, AJ convinces Guddan that he loves her. He asks for more time to tell Antara the truth about their marriage. Antara wants to return to AJ’s room as his wife. Guddan tries to stop Antara from seeing Guddan’s picture hanging in the bedroom. Antara asks Guddan to not interfere and asks her to stay away from AJ. Durga has already replaced the pictures and asks AJ and Antara to spend some alone time in the room.

In tonight’s episode, Guddan is jealous thinking of AJ and Antara in the same bed. She gets even more worried when AJ comes down to meet her. She is worried if Antara wakes up and sees AJ with her. AJ tucks Guddan in bed and goes back to his room after telling Guddan he loves her.

Antara panics seeing the mangalsutra break. She goes back to her room while AJ smiles at Guddan before leaving too. Daadi convinces AJ that breaking the mangalsutra won’t help. He needs to tell Antara the truth soon. Guddan goes to console Antara but finds Durga already beside her.

Durga tells Antara that Guddan will fix her mangalsutra. Antara thanks Guddan and leaves. Guddan tells Durga that even if the mangalsutra is put back together, AJ won’t put it around Antara’s neck. Durga tries to tell Antara she needs to spend alone time with AJ. Antara asks Durga to focus on her own marriage first.

Guddan is setting up in another room with all her clother. AJ puts some of his own clothes in the cupboard because as a couple they should share half of everything. Just then Antara enters the room and sees AJ with Guddan. How will Antara react to seeing this? Stay tuned to find out.

Proof That Kumkum Bhagya's Shabir Ahluwalia Would Be Perfect For The Indian Cricket Team!