In tonight's episode, Daadi tells Antara that she had written letters in the hospital asking AJ to get married after she dies. 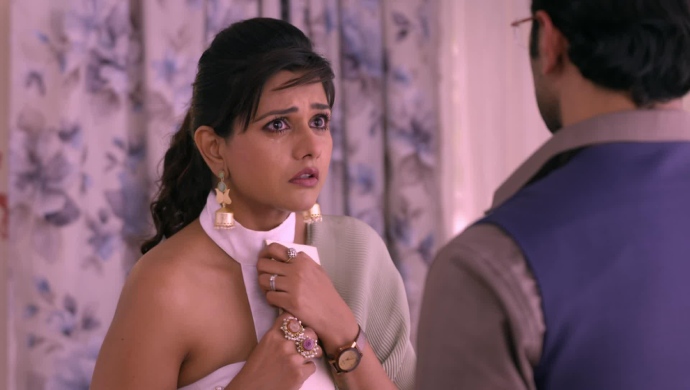 In tonight’s episode of Guddan Tumse Na Ho Payega, Antara catches AJ and Guddan close together. She asks Guddan to stay away from her husband. She asks Guddan to help her decorate the room for her romantic date with AJ. Guddan refuses to help Antara because Antara knows what AJ likes. Durga challenges Guddan that by the next morning AJ will leave Guddan for Antara. However, AJ tries to keep Antara away on their date. .

In tonight’s episode, AJ tries telling Antara that she was away from him for too long. He tries explaining that he has changed. Antara believes that he still loves her and will return to being the way he was. AJ leaves their date and the room. As Antara promises to bring the old AJ, Durga is upset that Guddan was right and AJ didn’t love Antara.

She gives Antara her wedding album. Seeing her old wedding pictures, Antara finds out that the palmprint she put on the wall on her wedding day is still there. When she gets there she finds another palmprint right next to hers. She tries all the family member’s hands on the palm print.

When it doesn’t fit anyone else’s she tries Guddan’s hands. She finds that Guddan’s hand is a perfect match. Antara asks Guddan to remove her palmprint from the wall. AJ holds Guddan’s hand and stops her from doing so. He tells Antara that Guddan is his wife. Antara is shocked to find out that AJ got married.

Daadi shows Antara the letters she wrote AJ from the hospital. She says how the last letter said that AJ should get married and start a new life. Guddan is worried of what will happen now that Antara knows the truth and decides to do something big. Stay tuned for Guddan’s reaction in tomorrow’s mahaepisode.

Karenjit Kaur To Kaafir: Dear Women, The OTT Stage Is All Yours