In tonight's episode, Guddan asks her father to take AJ and Antara in his house to keep AJ safe when he is away from her. 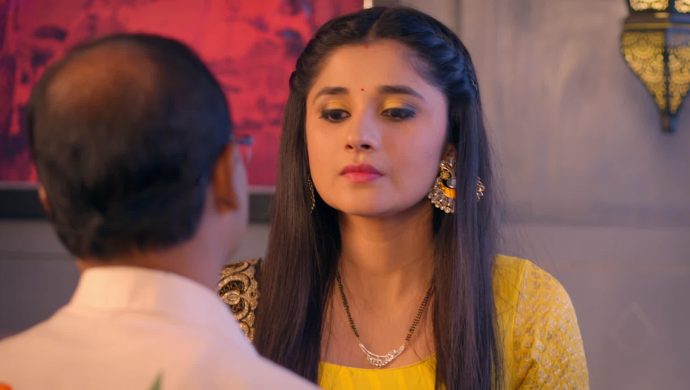 In the previous episode of Guddan Tumse Na Ho Payega, Guddan returns home with Antara’s pregnancy reports. When she goes upstairs to AJ’s room Antara tries to snatch the reports. When everyone from the family gathers Antara pretends Guddan pushed her down the stairs. Antara pays the doctor money and asks her to say that Antara’s child died in the fall downstairs. AJ gets angry with Guddan and decides to leave the house with Antara and Daadi. He hands over all his property and money to Guddan before leaving.

In tonight’s episode, AJ tells his mother that it is time for them to leave the family. Guddan is upset by AJ’s decision, but when she meets Antara, Guddan taunts her. Guddan taunts Antara for taking all the property and money which Antara wanted. Antara says she still managed to win AJ and Daadi’s trust.

Guddan warns Antara that when she proves the truth, the whole family will be behind her. Antara says she will either get her hands on AJ’s money just like Guddan did so she will have all of AJ’s family. Durga finds Guddan crying and tries to console her. Durga asks Guddan to stop AJ and Daadi from leaving the house.

Guddan later watches as Daadi and AJ take their bags to leave the house. Just then Guddan’s father, Bhushan, shows up and scolds Guddan for killing Antara’s child. He tells AJ that he is ready to abandon his daughter. He asks AJ and Antara to live in his house.

Antara is happy to rub salt in Guddan’s wounds and agrees to go with AJ to Bhushan’s house. Guddan hides in her room crying but is still satisfied. She thinks of Durga who gave her the plan. Guddan sends AJ and Antara to her parents house to keep them safe and keep Antara away from the Jindal Bhavan.

Guddan’s father shows up to her room and apologises to her. Guddan warns her father that Antara can go to any extent to get her revenge. Guddan plans to use the time Antara spends at her house to collect proof. Will Antara find out about Guddan’s plan? Stay tuned to find out.