Angad feels AJ is keeping Guddan away from him. He dresses up as Guddan to take AJ's life. 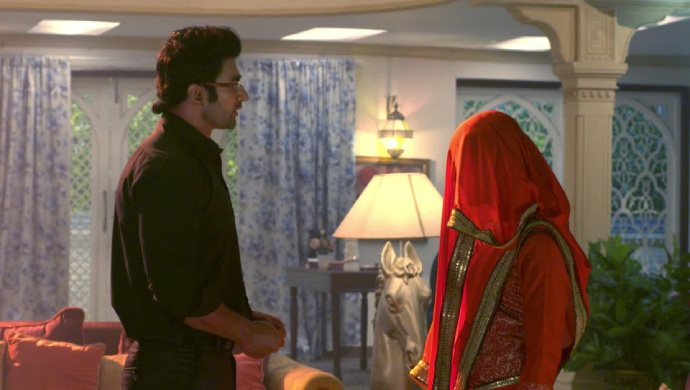 In the previous episode of Guddan Tumse Na Ho Payega, Angad begins to come in between AJ and Guddan. With Durga’s help, he manages to interrupt their six month anniversary dinner. He even ends up sharing the romantic candlelight dinner with Guddan. However, AJ catches Angad trying to put the mangalsutra on Guddan while she is asleep and stops him.

In tonight’s episode, AJ takes Angad out of Guddan’s room and to the temple where he asks him to keep the mangalsutra back. He then scolds Angad for trying to marry his elder brother’s wife. Durga steps in and stops the fight. She tries the divert the blame for Angad to Guddan, by saying that she takes such good care of him that Angad has fallen in love with her.

AJ doesn’t agree with her and blames Angad. He stops Guddan from meeting Angad instead sending a nurse to take care of him. Angad is furious and demands for Guddan. Durga convinces him that AJ is keeping the two lovers: Angad and Guddan apart. She asks Angad to save Guddan from her marriage with AJ by putting a mangalsutra on her.

Guddan, meanwhile, is upset when she hears that Angad has feelings for her. However she believes that it can be resolved if she speaks to him. She tries to explain to Angad that she values him as her best friend and even offers him a hand of friendship. Angad is furious and believes AJ is forcing Guddan to be just friends with him and not lovers.

After the Angad incident, AJ realizes his love for Guddan and how much he wants to be with her. He decides to put the mangalsutra on Guddan that night itself. Guddan asks Durga to pick a sari for her to wear when AJ puts the mangalsutra on her. Durga sees Angad watching through the window and shows Guddan exactly which sari to wear loud enough for Angad to hear.

Later, AJ professes his love for Guddan when she is standing near him. He asks her to lift the ghungat so he can put the mangalsutra around her neck. When the ghungat is lifted, he finds Angad standing there in Guddan’s sari. Angad rushes and stabs AJ multiple times till he is truly dead. How will the Jindal family react to this loss? What will become of Guddan now?