In tonight's episode, Antara asks Guddan to leave AJ and marry an older man, in return to save her own family as well as AJ. 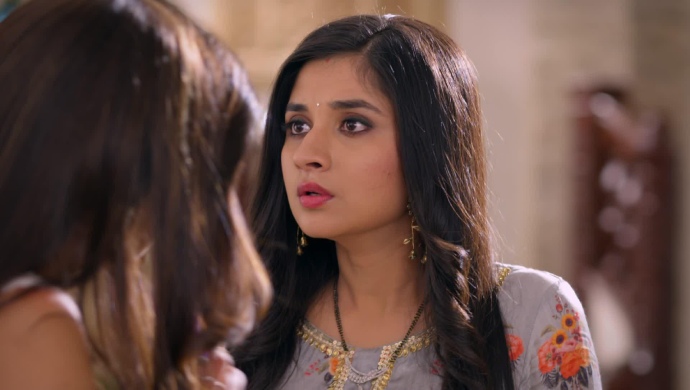 In the previous episode of Guddan Tumse Na Ho Payega, Guddan pays Durga money for helping her with Antara. Durga refuses the money saying she wants Guddan for forgive her. Guddan refuses to forgive Durga and makes her keep the money. Saraswati overhears the conversation and tells Antara about it. The next morning, Antara confronts Guddan’s father. She threatens to accuses him of molesting her if Guddan doesn’t distance herself completely from AJ.

In tonight’s episode, Guddan reaches her father’s house with a box. She tells AJ that she brought some of AJ’s things which he left behind. AJ thanks Guddan and says now she won’t have to see these things or his face ever again. Daadi and Guddan’s mother say how disappointed with Guddan’s behaviour.

When everyone leaves, Guddan tells Antara to leave her family alone. She offers Antara all the property and money to take him away. Antara is happy seeing Guddan’s proposal. However, she asks for more time to decide. Guddan returns home and prays that she can get her family back on her side.

Antara shows up and tells Guddan that she has a few conditions to sign the documents. Antara says she wants Guddan to get married to a much older man and leave AJ and the family. Antara calls in Harish, an old man, who wants she wants Guddan to marry. Guddan is shocked by Antara’s demand and runs into a room to lock herself.

Lakshmi bahu hears everything Antara says and goes to Guddan’s room. She tells Guddan that they should go to the police. Guddan says that Antara is near AJ and her entire family. Going to the police would put their lives in danger. Lakshmi understands that Guddan is ready to marry the man Antara chose to keep the family safe.

Later that night, AJ remembers his memories with Guddan. He looks at his phone thinking of calling up Guddan. Guddan too wishes to speak to AJ. However AJ goes off to sleep and dials Guddan’s number by mistake. She immediately answers his phone but only hears his breathing. She puts the phone near her ears and goes to sleep.

Stay tuned to find out if Guddan and AJ are separated. Watch the latest episodes of Guddan Tumse Na Ho Payega, now streaming on ZEE5.