Guddan fools Angad to go and save AJ. However, she meets Rocky there. 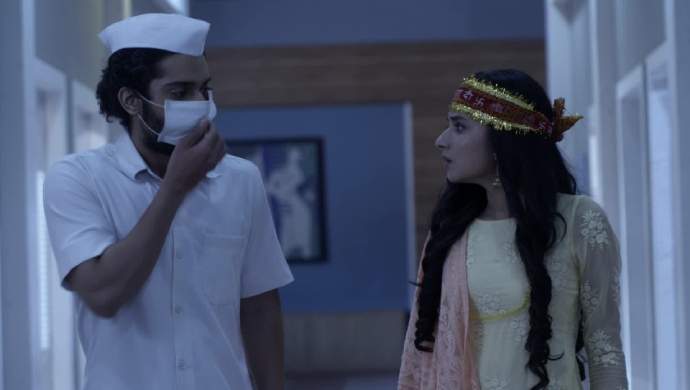 In tonight’s episode, Lakshmi tracks the call Guddan made to AJ, finds his location on a map. She gives Guddan this information and Guddan then decides to go there personally and bring back AJ. However, Laxmi reminds her that Angad will show up asking for Guddan to do the evening puja with her. Guddan then asks Laxmi to take her place and fool Angad into believing it is her.

Durga is scolding Angad for letting Guddan speak to AJ. She tells him it could prove to be a bad idea that would ruin their plan. Angad assures her that she doesn’t need to worry. Guddan won’t know how to track a phone on the internet. Durga hopes she doesn’t get in trouble because of Guddan’s investigation. She warns Angad that his marriage to Guddan will also be cancelled if that happens.

Guddan has already left the Jinal house to search for AJ at the exact spot Laxmi showed her. When she gets there she sees a mental hospital and begins searching for AJ. Sensing that Guddan has come for him, AJ also renews his attempts to escape. Rocky notices Guddan and sends all the mental patients in her direction.

Just as AJ is about to reach Guddan, he is hit in the head and knocked unconscious. Guddan turns her back a second too late and doesn’t catch a glimpse of AJ. Rocky shows up wearing a hospital breathing mask and a male nurse uniform. He tries to make Guddan leave the area. Guddan who doesn’t recognise Rocky insists that he show her the patients there so she can look for AJ.

Rocky then takes her around the hospital to different room. While passing by AJ’s room, AJ catches a glimpse of Guddan’s bangles. He makes a noise to call her attention. Guddan hears the noise and asks to check out the room. Will Guddan save AJ while Rocky is around? Stay tuned to find out.

Get Flawless Skin Like Shraddha Arya With These 5 Easy Tips