In tonight's episode, AJ apologises to Guddan for not believing in her and asks for one more chance to win her trust back. 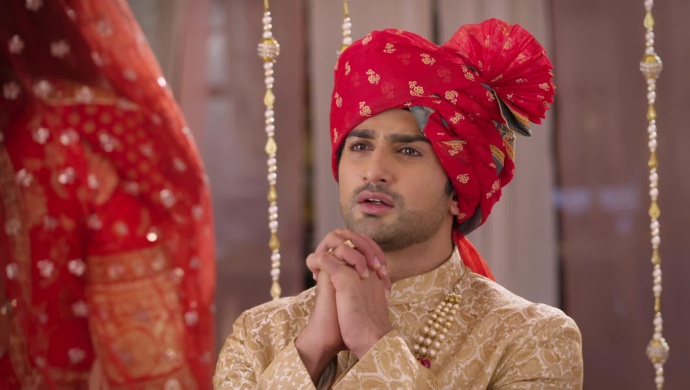 In the previous episode of Guddan Tumse Na Ho Payega, Guddan sees AJ fighting for her and realises that he still loves her. She decides to call up and tell him everything about Antara. AJ is locked unconscious in the car. Antara takes Guddan to the mandap and gets the wedding started. Durga tries to stop the wedding but Guddan refuses to let anyone but AJ stop the wedding. Later Antara tells Guddan that she won’t leave AJ and the family and asks Guddan’s husband to take her away.  When Antara leaves the groom lifts up his sehra to reveal her is AJ.

In tonight’s episode, AJ is shocked hearing everything Antara said. Even more surprised is Lakshmi Bahu. She is happy that AJ married Guddan and not some seventy year old man. Durga bahu tells Lakshmi that it was all part of Guddan’s plan. Meanwhile, Antara goes out to party with Saraswati and decides to check on AJ in the car later.

Guddan reveals that she called AJ but found Durga answering it. Durga found AJ asleep and woke him up to tell him the truth. Guddan says that she told AJ to do what she asks him to do once more. If he still doesn’t believe that Antara is wrong then she will never meet him again.

AJ apologises to Guddan and she forgives him. AJ also says that he is ready to accept Guddan as his wife again. However, Guddan says that she won’t be his wife, or even his friend anymore. She says she cannot trust him anymore. AJ promises to make things right with Guddan if he gives her one more chance.

Antara goes back to Guddan’s father’s house with Saraswati. She tells him that Guddan married an older man for money afer AJ left her. Antara calls herself the right bahu and tells Daadi that she took back all the property from Guddan. Daadi is pleased with Antara’s efforts and thanks her for saving the house.

While Daadi is thanking Antara, AJ shows up at the house and says that he has had enough. Will AJ let Antara know everything he found out about her? Stay tuned to find out. Watch the latest episodes of Guddan Tumse Na Ho Payega, now streaming on ZEE5.

EXCLUSIVE! Tujhse Hai Raabta: Malhar Asks Kalyani To Choose Between Him And Atul