In tonight's episode, AJ beats up Parv and even decides to shoot him as revenge for Guddan. 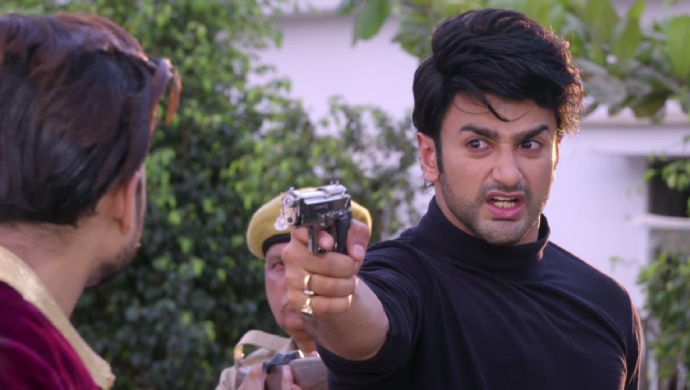 In the previous episode of Guddan Tumse Na Ho Payega, Guddan rescues AJ and gets Parv arrested. In the process of rescuing AJ she gets bitten by a poisonous snake. Guddan faints in the house and Lakshmi finds the snake bite mark. AJ rushes to the hospital with Guddan while trying to remove the poison from her body. The doctor says that the chances of Guddan surviving are less. AJ gets worried for Guddan and angry at Parv.

In tonight’s episode, AJ shows up in front of the police car with Parv arrested in it. He brings Parv out and begins beating him up. The police try to stop AJ from beating up Parv. However, Parv taunts AJ further about Guddan not surviving. AJ gets angry and he grabs a gun from one of policemen to shoot Parv.

Daadi and Angad try to stop AJ from shooting Parv. The police threaten to shoot AJ if he doesn’t give back the gun. Parv asks AJ to shoot him and prove that he is a murderer too. AJ imagines Guddan coming in between him and Parv and stopping him from shooting. However, AJ swears to kill Parv if Guddan dies.

Lakshmi sees Saraswati and Durga with plates full of food. She scolds them for eating hearty meals while Guddan is dying. Durga and Saraswati tell Lakshmi that this food is not for them. They go out and give the food for homeless people and ask them to pray for Guddan to become alright again.

AJ sees Durga and Saraswati asking for prayers. He goes to the hospital to ask the doctor about Guddan’s condition. The doctor also tells AJ that they need to pray for Guddan. AJ sits by Guddan’s hospital bed and begs for her to wake up. Daadi tells him that his love for Guddan will save her.

AJ decides to do a Maha-aarti for Guddan’s life, which is usually done by wives for their husbands. When AJ is doing the aarti a strong wind blows and puts out all the diyas that AJ is holding. AJ is shocked and worried that this is a bad sign. Will Guddan survive the poisonous snake bite? Stay tuned to find out.