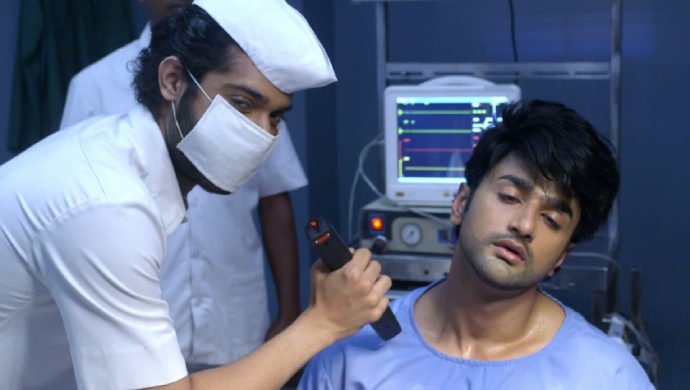 In the previous episode of Guddan Tumse Na Ho Payega, Guddan tries to find AJ in the hospital. Rocky manages to hide AJ away in time to make sure that Guddan doesn’t find him. Meanwhile, a electricity trip allows Guddan to take Laxmi’s place at the puja just in time. At the Durga Puja, Guddan finds AJ written on her mata ki chunni, in blood. That’s when she realizes that AJ is surely at the hospital and promises to go back for him.

In tonight’s episode, Angad approaches Guddan to know if she visited the hospital. He sees Guddan unwell and gets worried about her. He asks her to take care, and leaves without talking about the hospital. He scolds Durga for trying to create differences between him and Guddan.

Durga later sees Laxmi taking a tightly wrapped box, which she is trying to hide. Lakshmi takes the box filled with clothes and gives it to Guddan who puts on the clothes on. She takes the form of Durga Mata and appears in Angad’s dream. She warns him that she will make him pay for his sins.

Angad panics and runs out of his room. He tells Durga what he just saw. Guddan shows up as herself at that time and tries to calm Angad down. She tells him to go back to taking his medication and go to the hospital for treatment. That way he won’t go crazy and have such dreams again.

Durga tells Rocky that the Jindal family is coming to the hospital. She asks him to keep AJ someplace else. Just then AJ tries to escape again. Rocky manages to hold back AJ just as the Jindal family walks in. Guddan insists that Angad is looked at by a doctor immediately. Meanwhile, Guddan goes around searching for AJ.

She finds him in a soundproof room when Rocky and Angad are giving him electric shocks. They torture him and make him unconscious. Lakshmi comes in at the right time and consoles Guddan. Will Guddan have her revenge on Angad and Rocky? Stay tuned to find out.