In tonight's episode, Guddan reprimands AJ for forgetting their wedding anniversary. On the other hand, AJ plans to make Guddan confess her love. 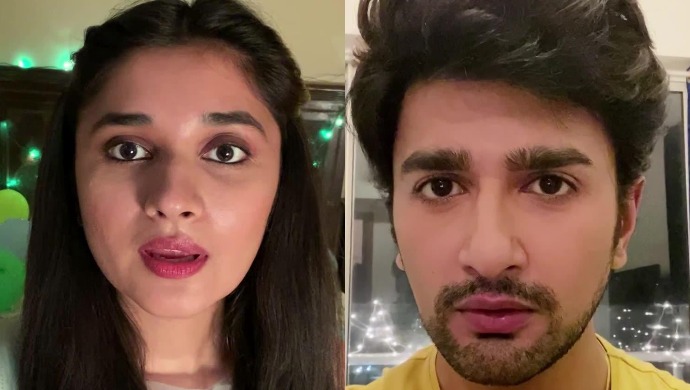 In the last episode of Guddan Tumse Na Ho Payega-Ghar Se, both Guddan and AJ miss each other and get on a video call. AJ teaches Guddan to make a cake and the former appreciates her. Guddan gets emotional remembering the first time they met. Guddan and AJ flirt with each other and get into the romantic mood. AJ plans a virtual date for his wifey Guddan and the couple recollects their past moments. Guddan and AJ get into a romantic dance and enjoy their date. AJ tells Guddan to tell her that she loves him and confess her feelings. But Guddan denies and instead state reasons why she loves him. Later, she tells AJ to tell her why he loves her. Within no time, Guddan falls asleep and AJ plans to make his wife confess her feelings for him.

In tonight’s epsidoe of Guddan Tumse Na Ho Payega-Ghar Se, Guddan wakes up and immediately video calls AJ. He pulls her leg and taunts her for waking up late. Guddan thank AJ for making her sleep at night by talking to her. Guddan gets shocked seeing AJ’s surprise and goes speechless. He sends a note to Guddan and tells her to say ‘I love you’ to him. Guddan disagrees and starts arguing with him. Guddan remembers the time when AJ confessed his love for the first time and took a long time. Both Guddan and AJ remember their romantic time spent together.

Guddan complaints AJ that she is getting bored at home due to the lockdown. AJ plans to make Guddan happy and tells her to play damsharas. Guddan tells AJ that she is not going to confess her feelings for him. The two start playing damsharas and AJ tries to make Guddan confess that she loves him. But Guddan starts laughing and tells him that he is way too smart. AJ pledges Guddan to say it but the latter denies.

AJ promises to make Guddan confess her love for him. Guddan tells AJ to close his eyes and surprises him by showing him ‘thank you’ notes stuck on the walls. Guddan explains AJ that initially when she used to commit mistakes, she used to stick sorry notes on the walls and how her husband changed her habit. Guddan thank AJ for teaching her self love and motivating her. Guddan instead of saying ‘I love you’ writes ‘I hate you’ on the mirror. She gets angry at AJ for forgetting their wedding anniversary and screams at him. AJ tries to explain himself but Guddan does not listen to him. What will happen next, will AJ be successful in convincing Guddan? Will Guddan forgive AJ?

Guddan Tumse Na Ho Payega – Ghar Se: Guddan And AJ Are Back To Entertain You…