In tonight's episode, Parv returns to haunt the Jindal family as he forces Guddan to shoot AJ in front of the entire family. 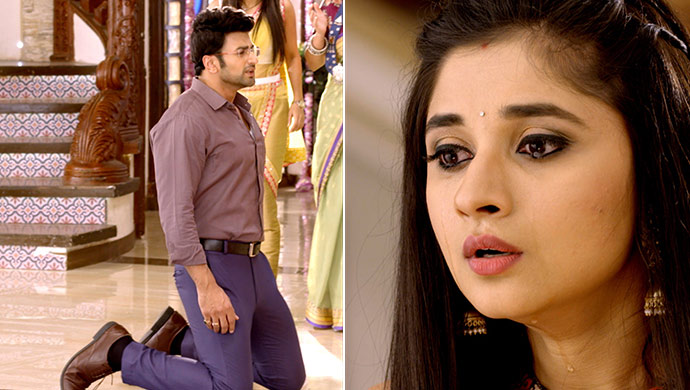 In the previous episode of Guddan Tumse Na Ho Payega, AJ tries to tell Antara that he has changed. Antara believes that AJ still loves Antara but she is ready to wait till he becomes his old self. AJ tells Guddan. Durga instigates Antars into seeing Guddan’s palmprints on the wall next to hers. AJ tells Antara that Guddan’s palmprints are next to her because Guddan is his wife. Daadi says AJ was ready to get married because Antara mentioned it in her letters.

In the next episode, Antara locks herself in the room while the family tries to call her out. Guddan sees smoke coming out of Antara’s room. AJ breaks open the door to find Antara burning her own portrait in the bedroom. Antara tells AJ that she accepts his marriage with Guddan.

Antara also says that she will help AJ and Guddan get engaged since she stopped their engagement. Durga and Saraswati are upset with Antara going to Guddan’s side. Saraswati complains about this to Parv who decides to break out of jail to ruin Guddan and AJ’s marriage even if it is the last thing he does.

Guddan tries to call up her mother and warn her but Parv catches her and stops her from doing so. Guddan tries to hide from AJ so she doesn’t see him and thus won’t get a chance to shoot him. AJ goes looking for Guddan and finds her in the storeroom hiding in a box. Guddan tells AJ she doesn’t want to get married to him to make him leave.

When AJ leaves the room, Parv scolds Guddan for not shooting AJ when she had the chance. He asks her to shoot AJ in front of the entire family or he will kill her father. Guddan walks downstairs with a gun which shocks everyone. She stands in front of AJ and shoots him at point blank range. AJ drops dead as the family rush by his side.

The entire family blames Guddan as Parv reveals himself as the real mastermind. He tells Guddan that he will fulfill his promise. He asks his men to let Guddan’s father go free. As soon as he frees Guddan’s father, Parv is punched. AJ stands in front of Parv unhurt as Guddan promises to punish Parv for what he did.

How did Guddan ruin Parv’s plan and save AJ as well as her father? Watch next week’s episodes to find out. Stream the mahaepisode of Guddan Tumse Na Ho Payega on ZEE5. For Premium subscribers the mahapepisode is already available on ZEE5, before telecast.

Social Media Day: 5 TV Actors Who Show A Different Side To Their Personalities On Gram