In an EXCLUSIVE interview, Nishant Malkani aka AJ reveals the moment he was sure Kanika Mann would play the role of Guddan. 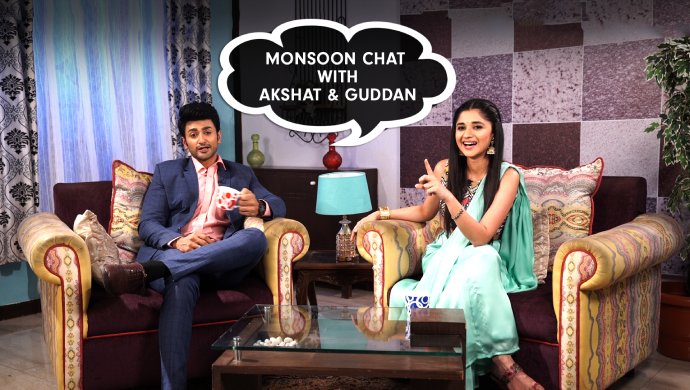 As we know AJ and Guddan’s marriage is on a break with the entry of Antara. Despite their regular fights on Guddan Tumse Na Ho Payega, the actors show they can still enjoy a fun conversation over tea. In an exclusive interview with us Guddan and AJ came together to talk about their love for the rains in this digital exclusive monsoon special.

AJ remembers the time when the show was just starting out. AJ says that the producers had selected around 12 girls to play the role of Guddan. But they weren’t able to pick one who was bubbly and cheerful. AJ remembers doing his first look-test with Kanika Mann and telling a friend that she will be the one to play Guddan.

Their conversation is light-hearted and funny around the theme of monsoons. AJ reveals that he loves taking a drive on the Sea Link during the rains, which is something on every Mumbaikar’s list. Guddan also has a very relatable favourite pastime of sitting near her window with tea when it rains.

Kanika Mann and AJ discuss their rain fantasies too. Guddan asks AJ how he would react if he sees Katrina Kaif dancing to the most popular rain dance song Tip-Tip Barsa Paani. AJ asks Guddan how would she react if Hritik Roshan was dancing to ‘Ek Pal Ka Jeena’ in front of her. Watch this quirky episode to find out their answers.

Catch a sneak-peek of the episode and watch AJ and Guddan Dance together here.

You can also find out 5 reasons why Guddan loves AJ, here.

Which War Is Arjun Rampal’s Paltan Based On? Hint: It's Not Kargil

Ahmed Masi Wali On Being Called Joey From Friends' Doppelganger: Hope His Fans Like Me Too