#NonStoBachFUN continues in these exciting adventures, Guddu has to face a tribe of uninvited aliens and deal with a baby dinosaur. 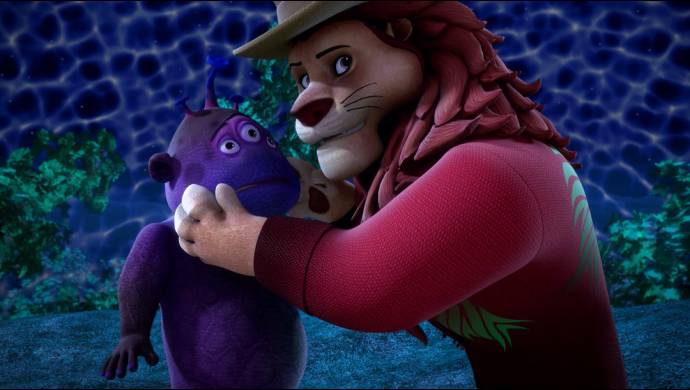 In Episode 16, Guddu and his friends are ready to celebrate Mayor Bear’s birthday. When Chugli and Googly fight over a jacket, they both squabble about who would wear the jacket at the birthday party. They end up hitting a boulder and the musical instrument, harmonica falls down. Guddu reprimands their behavior and tells his friends that this harmonica was given to him by his friend Vigyani Sen. His friends urge him to play it and they dance to the tunes at Mayor Bear’s party. Later, Guddu bids adieu to the party as he gets suspicious about some activity at Dhimkana Nagar.

Watch the latest episode of Guddu here and enjoy some #NonStoBachFUN.

In the next episode of Guddu, everyone is performing at the circus at Falana city. But outside there is a commotion as a thief, Bakkur tries to smuggle a special egg. As Inspector Rocky chases him the egg falls and breaks open. A baby dinosaur steps outside the hatched egg. He is transported to Guddu’s circus and everyone is in awe of him. It is a rare specie and everyone tries to figure out where the baby dino’s parents must be.

Guddu and his friends try to find out where the dinosaur belongs, in their quest they reach the valley of dinosaurs. In the valley they spot the baby dinosaur’s mother. She is angry and the tribe of dinosaurs comes out to kill them thinking that they are the thieves who stole their egg. They want to take revenge. But Guddu shows them his skills and the dinosaur’s mother accepts that Guddu was not the one who stole him.

The dinosaurs get happy and rejoice to have their baby back home! They ask Guddu to be a part of their celebration but Guddu declines and tells them he would definitely return for the baby dino.

Watch Parmanu The Story Of Pokhran On ZEE5