Guddu Episode 30 Review: Will Guddu Be Able To Save Heeru From The Crocodile’s Claws?

#NonStopBachFUN continues as Guddu thrashes some evil crocodiles and saves the lives of the kids of the jungle! 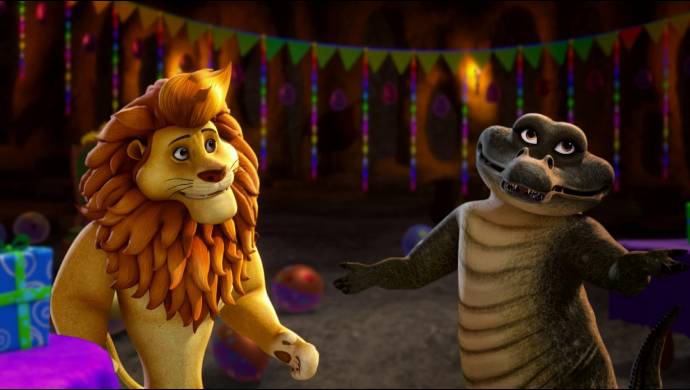 In the previous episode of Guddu we saw how the magnificent lion saved his friends from Billori and her assistants Bagad-Billa’s evil plan. But what if Billori is not the only evil animal of the jungle? In this episode, Guddu receives a call from Monty the cub. Guddu is awakened by the fright in the cub’s voice. He asks for Guddu’s help and tells him that he is on the mountain of the jungle. Guddu rushes there only to find he has been tricked by Monty, Pintu, Heeru, and their friend. He is furious and tells them never to repeat this. He also declares that he loves them all equally. So they don’t need to vie for his attention.

But Guddu’s declarations saddens Heeru and he feels that he has no one in the world. He sits by a riverside and tells his friends he won’t play with them. Just then a crocodile walks towards him and asks him what is wrong. After hearing, she asks Heeru to accompany her to her den. Monty and his friends summon Guddu for his help and swear that they are not lying about Heeru’s kidnapping. Guddu tries to find the den of the crocodile. A crab steps forward and tells them her child was also kidnapped by the crocodile. She shows them the way to the den.

Once Guddu and his friends reach the den, they find out that it is decorated and the kidnapper is bound to a chair. They free her and she tells them that she only kidnapped the children for her son’s birthday party. She adds that he does not have many friends. But four evil crocodiles steal the children to prepare their meal. Guddu then finds out the evil crocodiles at their lair and thrashes them black and blue. He brings all the children back and they visit the baby crocodile’s birthday party. Guddu warns Mrs. Crocodile and she apologises for the kidnap. Heeru also says sorry for his behaviour!

Guddu Promo: It’s A Colourful, Joyous And A #NonStopBachFUN Ride

Sa Re Ga Ma Pa Judge Wajid Khan Passes Away: A Look At His Melodious-Soulful Performances

What Are The Zodiac Signs Of Preeta, Pragya, Karan And Your Other Favourite TV Characters?