Guddu Episode 31-36 Review: Guddu And His Tribe Fight Billauri And Her Evil Schemes 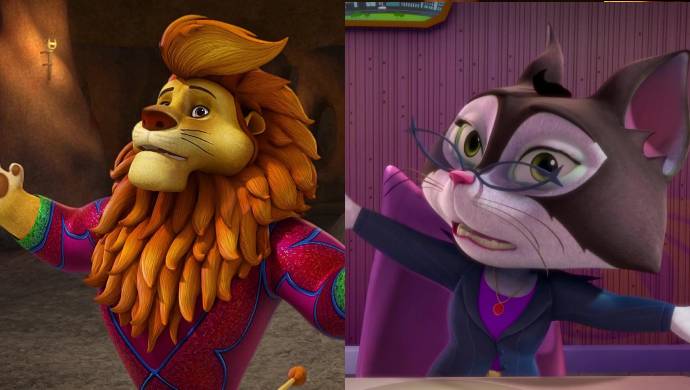 In these episodes, we will witness the Jungle Ka King in a fairly new avatar! Guddu will be seen fighting Billauri, new enemies, and also his own insecurities. In the episode Valley Of Sunflowers, we see Guddu playing with his friends. When suddenly a few walking sunflowers walk towards them and ask for Guddu The Great. Guddu introduces himself and they tell him that Raja Phoolchand has summoned him. Guddu asks them about the Valley of Sunflowers. Raja Phoolchand tells Guddu that a huge tree DugDug wants to excavate the sunflowers from their valley. Guddu and his friends make a plan to help the sunflowers. He asks Balloo to fill in the entire water near DugDug’s roots. DugDug flees in search of water and Guddu saves Raja Phoolchand and his valley!

Watch an episode of the show here.

Guddu is appreciated for his Khushiyon Ki Delivery and everyone thanks him.

In the next episode, Guddu celebrates the 25th Anniversary of being an entertainer. Guddu circus silver jubilee performance is special as Guddu distributes dolls that look like Guddu and every child becomes happy. Billauri and her assistants Bagad and Billa exchange the original dolls with remote-controlled ones. The violent remote-controlled dolls become active at night and the children get scared. Guddu collects all the dolls and fights with Billauri. He hands her over to the police. Guddu and his friends replace the dolls with original ones.

In the next episode, Guddu and his friends decide to do something new in their circus. They read in a newspaper that their circus has become boring. They decide to make a contract with Danger Ringmaster. He asks them to perform new tricks such as Veeru does acrobatics, Chugli lifts weights, Giru’s neck becomes a trunk and Balloo needs to dance like Babli! Guddu becomes their chef. Ringmaster also separates all of them. But Guddu eavesdrops on Danger and finds out that he has been sent by Billauri and the news is fake! Guddu and his friends teach the Ringmaster a lesson.

In the next episode, Guddu receives a gift from Raja Matru Singh. The latter sends a box full of a special mat and boots for his friend Guddu. Guddu reads a note in which the Raja has written that the mat and the boots fly in the air. Guddu and his friends decide to use these in the circus. They receive applauds for it. But Bagad and Billa steal the mat and a pair of boots. Chugli has another pair which he hands over to Guddu. Guddu follows Billauri and her assistants to the cave where they are on a quest for treasure. Guddu smacks Billauri and hands her over to Inspector Rocky, he also gives Mayor Bear the treasure box.

In the next episode of the show, Guddu and his friends perform a special act and receive a standing ovation for it. Guddu’s friends ask him to write a biography when a writer Mushki Mashoor offers to do it. Guddu accepts his offer and Mushki becomes Guddu’s shadow. He follows him everywhere and imitates him to a point where Guddu’s fans start clapping for Mushki. Guddu and his friends find out that Mushki is a goon in the disguise of a writer and that he wants to kill Guddu! Guddu fights off Mushki and outraces him in strength, ideas and agility!

Is Guddu your favourite superhero? Watch all the episodes on ZEE5 now!

Guddu Episode 1-5 Review: The Adventures At Dhimkana Nagar Are Super…

10 'Atrangi' ZEE5 Originals That Are Unique And Never-Seen-Before!

Cinderella Review: A Tale Of Finding Love And One’s True Self