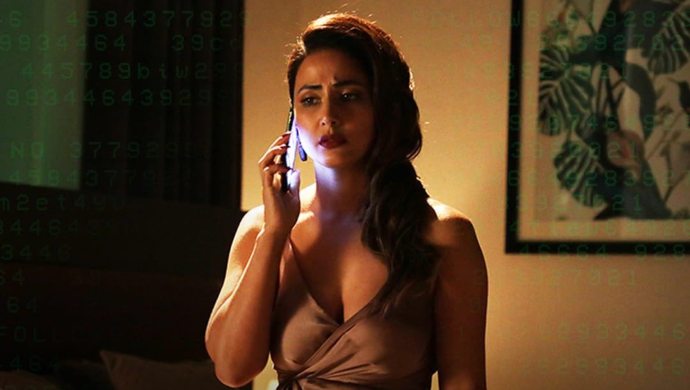 Hina Khan is easily one of the most sought after artists in India at present. After ruling hearts for nearly a decade, first with her portrayal of a quintessential bahu and later with her stints on reality shows, Hina is now ready to win over the silver screen. She is set to make her Bollywood debut with Vikram Bhatt’s upcoming film Hacked, which also stars Rohan Shah in the lead role. As the title suggests, the movie exposes the dark world of hacking, and how cyber crimes and bullying can ruin lives. In an age and time where everything on the Internet is forever, private information is at a great risk of being misused.

The trailer of Hacked shows Hina as a successful businesswoman, Sameera aka Sam. Rohan essays a 19-year-old hacker who becomes friends with Sam, rather obsessed with her. The story takes an unexpected turn when the teenager’s obsession gets out of hands as he begins planting cameras, stalking her and also blackmailing her with the extracted footage. Sam receives threats from the teenager who decides to use her for sex, because she turns down his proposal. He is even shown bullying other girls by making their MMS and exposing their private pictures.Watch the trailer here:

“I have been making films based on horror and paranormal, but this time I chose to use a subject very close to reality by showcasing to them the real horror of matters in their daily lives. In this age of social media, everybody is vulnerable to being hacked and nobody knows about it and it would take one clever hacker to ruin our lives within few minutes.” Vikram Bhatt was quoted saying by a leading daily.

The report further quoted Bhatt, “Hacked is based on the horrors of technology, how no one is safe. It just takes one man with enough knowledge of technology and a heart filled with hate to destroy you.”

The film is being presented by Zee Studios, and it also stars Mohit Malhotra and Sid Makkar. Hacked will release in theaters near you on 7 February 2020.

Valentine’s Day 2020: 20 Songs That Remind You Of Love, Heartbreak And The…