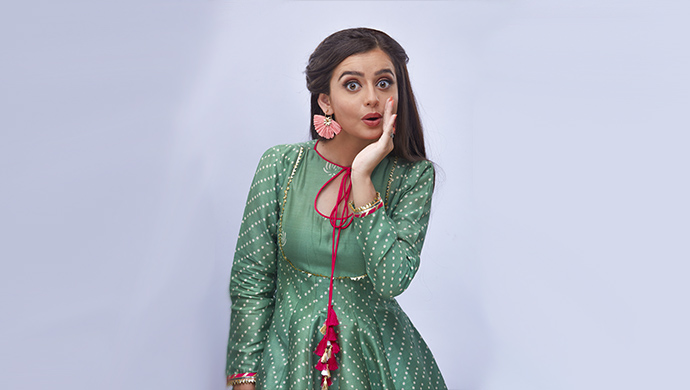 One week into the run of Hamari Bahu Silk, we can proudly assure the show is extremely entertaining to say the very least. The story begins with Paakhi trying to find a job for a stable income following her Baba’s passing away. Her uncle and aunty forcefully take possession of her house and make Paakhi’s mother do all the chores. This makes Paakhi furious and she decides to drive both her relatives away. However, both Kaka-Kaki hatch an evil plan and sell Paakhi’s familial abode, leaving both the females homeless.

Meanwhile, B-grade actress Natasha is facing a hard time after producer Kapadia (Rajesh) threatens to remove her from the film because of her hoarse voice. She tells Aakash to find a dubbing artist she cannot afford to lose the project. Out of desperation, Paakhi seeks shelter at an aunt’s home and faces a deadline of two days to find a place of her own. She goes to audition for an RJ hunt, organized by Aakash to find a sexy voice for Natasha. The producer loves Paakhi’s ‘Silk’ voice and demands her to be roped to dub for Natasha. Alas! Aakasha and Natasha nearly fail to find Paakhi when she shows up for the job of the latter’s PA at the star’s house. However, they both are not are that the voice they have been looking for all across belongs to Paakhi!

Natasha now gives a task to her own PA, Paakhi, to find that voice. Paakhi immediately recognizes the clip from her RJ audition, but will she help Natasha? Clearly, these two girls are incomplete without each other. Paakhi’s new landlady Baa (Sarita) is a strictly orthodox woman, whose grandson is Nakshi (Zaan). Their first meeting was all sorts of a mess since Paakhi gets him locked up in jail only to impress Natasha. Will Baa be okay if Paakhi dubs for Natasha in sensuous films? Will Nakshi try to oust Paakhi to seek revenge? Wait and watch!

Overall, the first week has been pretty amazing. Chahat is totally slaying it with her remarkable performance as Paakhi – she is mischievous, smart, sweet and very innocent at the same time. Zaan is no less than a Bollywood film hero, dapper and a brilliant performer. Reeva as Natasha plays her part to T, the seductive star who cannot wait to make it big! What are your thoughts about Hamari Bahu Silk? Don’t forget to watch it from Monday to Friday at 10.30 pm only on ZEE5!

ZEE5 Original Series Bombers Promises Entertainment At Its Best, Watch The Teaser Inside