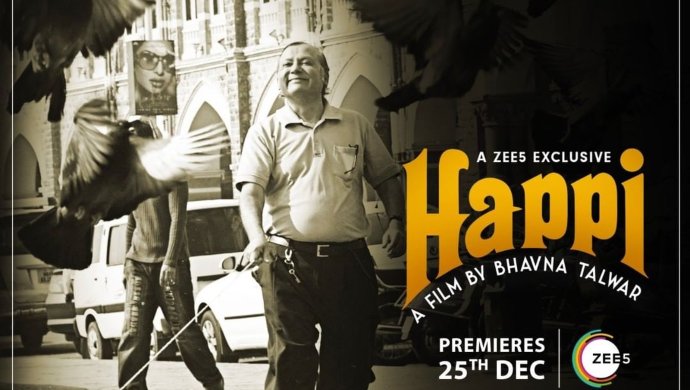 #HappiTimesAreHere! Happi, a Hindi feature film directed by Bhavna Talwar, starring Pankaj Kapur is all set to premiere on ZEE5 this holiday season. The comedy drama started streaming on ZEE5 from 25 December 2019 onwards. Made in black-and-white, Happi features Pankaj in a Chaplin-esque character. An astounding survival saga of a social misfit, Happi, finally shall see the light of day after years of delay. Thus, we present five reasons why you cannot miss catching this gem of a film on ZEE5!

1. Pankaj Kapur: To begin with, the acting stalwart enjoys a reputation for his flawless acting chops. He is well-supported by his wife Supriya Pathak and actress Hrishitaa Bhatt in the film.

2. Pankaj has a cute companion: No, we don’t mean his gorgeous wife! His character Happi finds a support system in a puppy. Yep, no kidding. “The most amazing part was that during rehearsals, the dog never behaved or acted the way we wanted him to; so finally we gave up on him. But the moment camera rolled, the dog responded well and we have captured amazing wide shots of the two (Pankaj and dog) together. It was pure magic,” Bhavna told a leading news portal in an interview.

4. Music: Maestro Illayaraja has provided the film score for Happi while Gulzar has penned the lyrics. South superstar Kamal Hassan has also sung a song in this movie.

5. Shahid Kapoor’s stamp of approval: ““Saw some footage of dad’s next as an actor called Happi…Just stunned with what I saw… Amazed at how he creates a new person with every role he does,” the Haider actor has posted on Twitter.

Happi revolves around a man who makes a living by making people laugh and also sings at Cafe Bombay. He earns little, but is content as long as his minimal needs are being met.. However, the man’s world comes crashing down when Cafe Bombay is set to be revamped into Club Mumbai – a high-class lounge. Refusing to be bogged down, the man fights the odds with a cute puppy for a companion by his side.

Need we give you more reasons? Stay tuned for more updates and dope on Happi!

In the meantime, watch Pankaj Kapur in the film Ek Ruka Hua Faisla on ZEE5 below:

Are you a fan of Pankaj Kapur and his works? Comment with a yay or nay in the box below.

Don’t forget to check out the collection of latest Hindi, Marathi and South-Indian blockbuster movies on ZEE5.