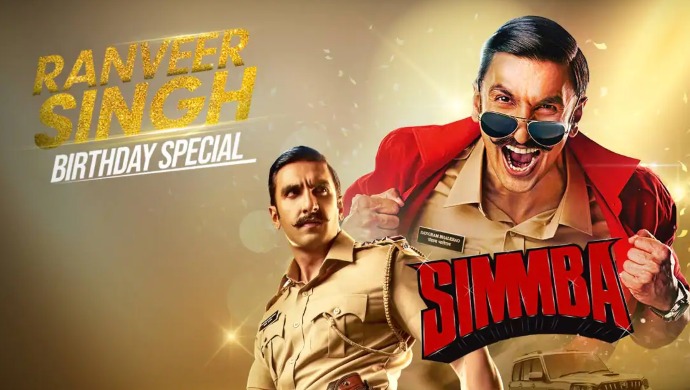 The BABA of Bollywood, also known as a livewire performer and the reigning Simmba of the box office – Ranveer Singh is all this and more. The powerhouse of an actor always tugs at our heartstrings with his infectious energy levels and a wide smile on his face. Ranveer, who turns 34 today, is one of the few stars of his generation to have essayed a variety of roles including those with shades of grey. Besides cinema, Ranveer is a full-time lover to his gorgeous wife Deepika Padukone and often lightens up our screens with a PDA mush-fest on social media. When not acting, you can find Bollywood’s Bittoo Sharma spreading good vibes and tons of love amongst his fans and friends. In short, aadmi bade darling types ho aap Ranveer Singh! On his birthday, we have rounded up 34 things about the much-loved star every fan of his ought to know!

1. Born on July 6, 1985. Ranveer’s full name is Ranveer Singh Bhavnani. He dropped ‘Bhavnani’ from his name because he thought it was too long to be remembered. He adopted the last name ‘Singh’ from his grandfather who is a Sikh.

2. Ranveer and actress Sonam Kapoor Ahuja are cousins. The Bajirao Mastani actor is the son of Sonam’s aunt.

3. Ranveer holds a Bachelor of Arts degree from Indiana University in Bloomington, USA. He took theatre as a minor subject during his course there.

4. Before Bollywood happened to Ranveer, he worked as a copywriter in the advertising field with a renowned agency.

6. The Padmaavat actor has a thing for X-rated magazines and picks them up from all the countries he visits.

7. Ranveer loves masala action and Bollywood style dance. Once at a birthday party in childhood, he was asked to entertain. In no time, he jumped into the lawn and didn’t leave the dance floor for a long time.

8. Reportedly, Ranveer was very picky with his debut film. Thus, he turned down three films before Band Bajaa Baraat.

9. Ranveer was rumoured to be dating Hema Malini’s daughter Ahana Deol before he entered the industry.

10. Ranveer’s mom Anju Bhavnani doesn’t like to see her son die onscreen, reason why the actor insisted his mom not watch Bajirao Mastani. However, Anju ji, just like any of us, is keen on watching a film starring Ranveer – Deepika where his character doesn’t die.

11. Ranveer states his body type is “Endomorph”, which makes it very fast to gain weight but losing it all is a task.

12. Ranveer includes eggs, fruits and healthy nuts in his diet. According to his shoot schedules, the quantity is altered.

13. He abstains from carbohydrate-rich food items such as rice, roti, bread, noodles and pasta.

14. Ranveer is said to be an ‘expert’ in making a vegetable-free dish. Using butter in the right amount can make anything tasty is his belief.

15. Ranveer had once said that he feels Anushka Sharma is the strongest of all heroines. Her metabolism is very high.

16. Ranveer had gifted his mother an expensive car ahead of the release of Vikramaditya Motwane’s film Lootera.

17. Ranveer has time and again expressed his obsession with using the hand sanitizer again and again.

18. An ideal date according to Ranveer consists of: good food, good music, and good s**.

19. Once, a fan of Ranveer’s offered him an expensive gold chain. The celebrity returned the gesture with a gift too.

20. Contrary to what many may believe, it is RS’ specialty to drink only once or twice a year. Say, WHAT?

21. A die-hard Bollywood fan, Ranveer was so obsessed with the song Chaiya Chaiya that he was listening to it in school during a lecture too. He later was suspended for a day after he was caught in the act.

22. Megastar Amitabh Bachchan had penned and sent a handwritten note to Ranveer appreciating his performance in Ram Leela.

23. All set to recreate one of the iconic moments from the history of Indian Cricket in his upcoming film, Ranveer revealed he was rejected by former cricketer Mohinder Amaranath. He aspired to play for Giles Shield during his school days but reached late for the practice session. But after watching him play the game, Mohinder Amaranath turned him down.

24. If given a chance to work in an Amitabh Bachchan classic film, Ranveer would love to recreate Don he once told the media.

25. In an interview, Ranveer confessed that he has ‘no problem with nudity.’

26. During an interaction with a leading TV channel, Ranveer recalled the moment the first time he met Deepika saying, “The first time I saw her, I almost went flat!”

27. Rumour mills churned speculations that Ranveer’s father had offered Aditya Chopra money in exchange for his son’s debut with Band Bajaa Baraat. Hurt by these rumours, Ranveer clarified that he got into this industry on his talent alone.

28. Ranveer is known to have exceptional mimicking skills.  The actor can very well enact his mentor and filmmaker Sanjay Leela Bhansali reportedly.

29. Besides acting and mimicking, Ranveer loves to rap. He has a collection of several freestyle rap songs on his phone. The actor recently launched his record label IncInk shortly after his February 2019 release Gully Boy.

30. Ranveer is a true blue foodie and loves spicy food!

31. Owing to his zero financial acumen, Ranveer’s finances are managed by his father.

32. Ranveer was the first choice for Bombay Velvet. But the role went to Ranbir Kapoor because the former’s dates weren’t available.

34. Did you know at one point Ranveer considered changing his name because it sounded too similar to Ranbir? I mean, so glad he didn’t right.

On his 34th birthday, we wish the star a very Happy Birthday! Celebrate the day with his blockbuster movies only on ZEE5.