Angad Hasija, Ankitta Sharma and Paras Kalnawat reveal their 4 am buddies, crazy memories with BFF and plan to celebrate their new friendship. 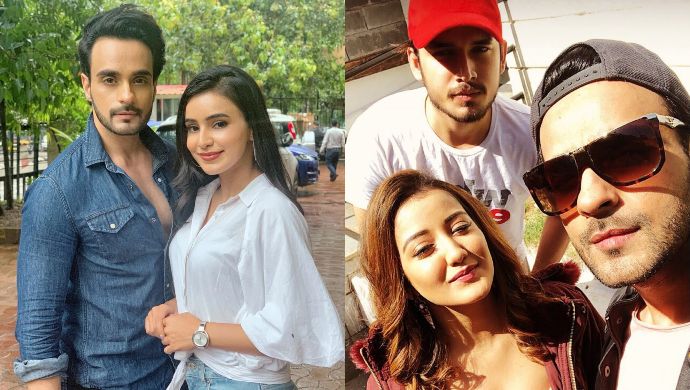 Happy Friendship Day 2019 | Season two of ZEE5 Original web series Ishq Aaj Kal recently premiered on the OTT platform. Angad Hasija, Ankitta Sharma, Paras Kalnawat and Roshmi Banik may not exactly be each other’s support system in the digital drama, but these actors have definitely found a friend in each other off-screen. In an exclusive interview, Angad, Ankitta and Paras reveal all about their Friendship Day 2019 plans and also about being each other’s 4 am buddy!

1. What are your plans for Friendship Day, are you guys shooting?

Angad: Paras, Ankitta, Roshmi and I have a lot of fun. Like I had mentioned earlier, we keep celebrating something or the other every day on the sets. Even though we all get assigned different rooms, we all end up in one room and play loud music. We are planning a dinner sometime soon!

Paras: No, we are not shooting, so I’ll be spending this day with all my best friends who are more like a family. First one is obviously the one I love, she’s my friend first and then my love, the second one is more like a brother to me that’s Sagar Kasar and there are few who are more like family – Meet Chheda, Harsh Shah, Tanmay Fadnavis, Angad Hasija, Ankita Sharma and Roshmi Banik. So will for sure make some plans with them and maybe go for a long drive.

Ankitta:  No special plans for the day but Angad, Roshmi, Paras and some other actors on the show…we are all planning to catch up in a day or two.

Angad: Paras is, of course, my 4 am friend, Ankitta and Roshmi I don’t think will get up at 4 (laughs).

Paras: My 4am friend is Sagar Kasar and from IAK family it’s obviously Angad coz I’ve spent most of the time with him and he understands me more than anyone on set. Catch a glimpse of Angad and Paras’ onscreen camaraderie here:

3. Tell us one crazy memory of you and your BFF.

Paras: With my BFF Sagar I have so many memories, from the time I’ve come to Mumbai, we’ve done crazy things here. I remember disturbing him at 2 am by honking outside his house where he lives with his family and he literally had to sneak out and got scolded by his mom when he got caught. And I remember how crazily we spent time at Imagica, where Meet and Sagar forced me to take all the rides and I am dead scared of heights and all the rides over there. I literally passed out.

Ankitta: I remember bunking the college for the first time with my best friend. We were so nervous and excited at the same time. We couldn’t even manage to go outside the college premises but we were just so happy about the fact we managed to skip the lecture somehow.

Angad: One crazy memory we have is from the Manali schedule. Paras played a prank on Ankitta, he’d call her posing as an uncle and keep asking her to meet. He told her that he is a man whose daughter wants to meet Ankitta but he wants to meet her first. Ankitta even ended up crying later! We shot in Manali for 15-20 days, it was one of the best times. We all left on different days, depending on our schedules. So when I left, all these guys cried and it was all very emotional for me.

Sister Day: 10 Television Shows That Explore The Bond Between Sisters