Kumkum Bhagya’s Prachi And Ranbir: It Is Always Special To Win A Zee Rishtey Award

Prachi-Ranbir talk about fans' reaction to their characters and KumKum Bhagya winning the High Five On ZEE5 award for 'Most-Watched TV show' on ZEE5. 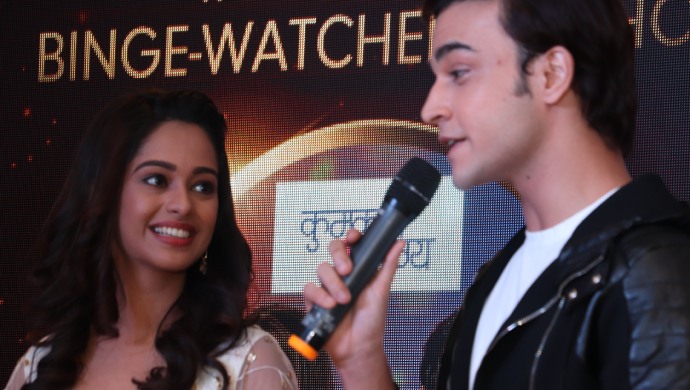 Krishna Kaul and Mugdha Chaphekar play the much beloved characters Ranbir and Prachi on the show Kumkum Bhagya. In their first year on the show, they both won at the Zee Rishtey Awards. They also collected their High Five On ZEE5 Award for being a part of the most-watched TV show on ZEE5 in the whole year as well as since the month of November. We sat down with the newest couple on Kumkum Bhagya to find out how their first year on the show has been.

Watch their unique chemistry on the show here.

1. How does it feel winning two awards for Kumkum Bhagya – a show that is the most binge-watched show on ZEE5?

Krishna: Yes it feels great to win both the awards most watched show all year and most watched show since November. It is a big thing for us because I feel better about the show. I love how the show is progressing and this is for everyone who works on the show.

Mugdha: I think we have a wonderful team from the spot boys to Ekta (Kapoor) Ma’am. When it all comes together you get something as overwhelming as Kumkum Bhagya.

2. What was the biggest twist on the show Kumkum Bhagya that even you didn’t expect?

Krishna: I think the biggest twist is yet to come.

Mugdha: Yes it is yet to come.

3. What was the nicest reaction you got from the fans about your character on the show?

Krishna: I like how the fans accepted me as a cool young college stud and a cutie because that’s exactly what I thought I was.

4. For you (Mugdha) it was different, because the fans disliked your character when you started on the show. Do you feel like that perception has changed?

Mugdha; I think it is very natural. People have watched the show for five years and they love the characters as well as identify with them. So it’s natural to hate it when something changes on the show. Having said that I feel like Prachi and Ranbir are getting a lot of love from the fans now. People also love Prachi’s simplicity because she is in her mother, Pragya’s shadow. So I think good things will take their time but they are completely worth it.

5. Do you think Ranbir and Prachi will be the next Abhi and Pragya?

Mugdha: Honestly speaking, that should not be the question. Abhi and Pragya are their own couple and Ranbir and Prachi are different. There cannot be one more Abhi-Pragya. It’s up to the audiences to decide how big a TV couple Ranbir and Prachi end up becoming.

Krishna: You can never be the next anything. You can only be your own thing. So I don’t think we’re trying to be the next Abhi and Pragya.

6. What’s your couple names and how happy are you with it?

Mugdha: I love couple names, because it shows how much the audiences love the show and your character. There’s ‘PranBeer’, which I think is mostly used.

Krishna: There’s also ‘RanChi’ which I’m sure is not used more because it is also the name of a city.

7. How did it feel to win your first Zee Rishtey Awards in your (Krishna) first attempt itself?

Krishna: It’s obviously a great deal! It still is a great deal for me. When I held the award and remember thinking that it was so heavy. I didn’t know awards would be this heavy. I gave a speech the day when I won the award and I don’t remember what I said. That’s how lost I was. Those five seconds where they call out your name to accept the award is something to live for.

Zee Rishtey Awards! An evening full of laughter, love and happiness… Thank you @zeetv for this one! Thank you @ektaravikapoor Ma'am for giving me Prachi- I'm so much in love with her! Thank you each and everyone of you for so much love and encouragement.. Love you ♥️ #ZRA #ZRA2019 #Awards #BestNayaSadasya #KumkumBhagya #Prachi #Love #MugdhaChaphekar #Gratitude #Bliss Outfit by – @styleinwinnie Styled by – @shrishtimunka Assisted by – @twinklebakhai @anshudixit_ Jewelry @nagsiddiqui Make up @makeupbysantosh

8. It’s not your (Mugdha) first Zee Rishtey Award. But how does it feel winning the award for Kumkum Bhagya?

Mugdha: Like he said, it’s always a great feeling. So it doesn’t matter whether you’ve won it before, it is always exciting to receive an award for your work. Plus to win an award for Kumkum Bhagya, the most loved show on TV makes it even more special.

Watch them win the Zee Rishtey Awards along with all your favourite TV stars and dazzling performances, on 29th December at 7 pm.

ZEE5 #ResolutionBinge: Here's The Line-up Of Blockbuster Shows On ZEE5 In January 2020