Did you know Vicky underwent an intense boot camp training at Mumbai's Navy Nagar ahead of Uri: The Surgical Strike? 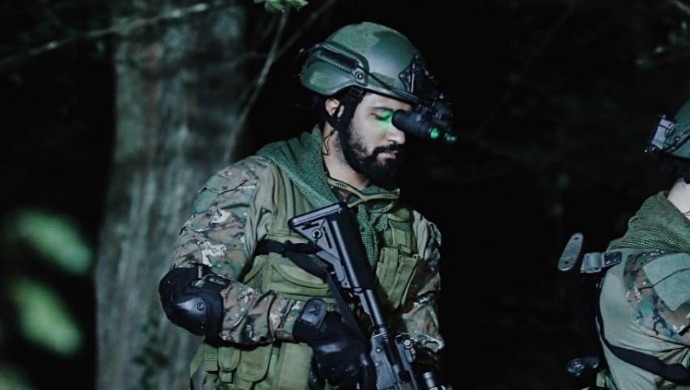 Bollywood kickstarted 2019 with a bang with the triumphant run of Uri: The Surgical Strike. Based on the surgical strikes conducted by the Indian Army in September 2016, the film starts Vicky Kaushal, Yami Gautam, Paresh Rawal and others in pivotal roles. Notably, these strikes were India’s response to the infamous Uri attack which claimed the lives of 19 Indian Army jawans in the Jammu and Kashmir town.

It is needless to mention that Vicky has been on a winning streak off late. Be it Raazi or Sanju or Manmarziyaan or his web outings, the 30-year-old has rewritten the definition of a ‘hero’ in Bollywood. Essaying the role of Major Vihan Shergill, Vicky underwent an intense training and prep session ahead of Uri: The Surgical Strike. Speaking about the training part, Vicky spoke to Komal Nahta on Bollywood Business and revealed that he and other 20 actors played Special Forces Para Commandos in the action thriller. They were given military training and boot camp training for their roles.

Vicky and other stars were trained at Mumbai’s Cuff Parade (Navy Nagar) military base by a Sikh regiment posted there. They took training at their obstacle training ground. It involved two months of boot camp training, followed by a couple of weeks of military training. The boot camp training was spearheaded by personnel who was trained by a Black Cat. It comprised of basic endurance building, stamina building, crawling, jumping and tactical training. The cast also learned about the formations. For example, when the troop is entering a room, what formation to enter in or after has to be kept in mind. Special Forces operate in stealth mode so they don’t talk when on the ground, informed the Masaan star.

A glimpse into my prep for URI. Not just me… me, along with a team of 20 other wonderful actors who gave their everything to the film. Big shout out to all my coactors, trainers and coaches… @rakeshudiyar ,Mangesh, @amol_kyatam @vickyarora @karannagari_mma #AtulMongia, ‘The Sikh Regiment’ @indianarmy.adgpi and the captain of the ship @adityadharfilms for giving me the most stimulating time as an artist. #URITheSurgicalStrike releases on 11thJan2019 🇮🇳🙏

The signals, the formations, how to hold guns when patrolling, or when in high alert area, and even how to crawl with guns – everything was taught to them. If a particular commander is standing in a position, how the team realizes what does it mean, a diamond formation or a straight line has to be made. He further added that the levels of training were increased slowly and gradually, simultaneously also increases stamina and endurance. The basic warm-up used to be to run 30 rounds of the ground. It started off with just the actors running, then they to hold a gun and run and then it went to holding the gun in the air and running. “Ek wo military ka sur aapke dimaag mein daalna,” revealed Vicky.

What it took to play a Special Force Para Commando. A glimpse into my prep time for #URITheSurgicalStrike https://t.co/MobxEjwlKz Film releases 11th Jan 2019 🇮🇳

Vicky narrated that it was important to adopt the discipline and body language of the commandos. As for Yami, she plays an intelligence service officer Pallavi in the movie. She didn’t train physically but had to prep mentally. “Instinct was very important as a performer to lean on,” Yami told Komal Nahta on the show.