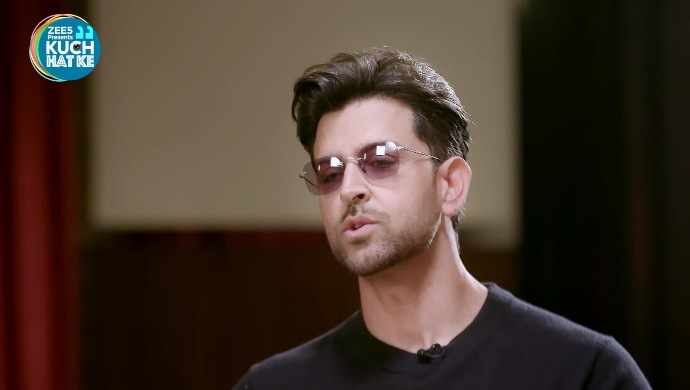 ZEE5 Original show Kuch Hat Ke is the latest offering from the OTT platform showcasing the fun and quirky side of tinsel town celebrities. First up on the chat show were Super 30 stars Hrithik Roshan and Mrunal Thakur who made right up close and personal confessions and brought the house down with host Siddharth Kanan. Mrunal, who gained popularity with her portrayal of Bulbul Arora on Zee TV show Kumkum Bhagya, spilled the beans on her crush on Hrithik. The Bang Bang actor too made some exciting revelations about how he wanted to become an astronaut, danced to earn pocket money and more. Read on to know five biggest revelations Hrithik and Mrunal made on the show.

1. Mrunal on having a crush on Hrithik: I think he knows!

In 2000, Hrithik received 30,000 love letters. Speaking about her crush on the Kaho Na Pyaar Hai actors, Mrunal said, :Who didn’t? I would be lying if I said I didn’t have a crush on him. Uss 30,000 mein se I think mera bhi ek hoga. Day one, the moment I got to know I am doing a film with Hrithik Roshan, I went like *screams*. I didn’t have a voice to scream but I told my sister and she started sobbing. Aur hum logg bas raaste mein ghar jaa rahe hai and we were doing the Ek Pal Ka Jeena step. I was really trying to hold on, ever since I found out I am doing a film with him, everywhere I would see Hrithik Roshan.”

2. Growing up, Hrithik wanted to be an astronaut.

3. Mrunal would polish her father’s shoes to earn her pocket money.

“I am really fond of drawing, painting, mehendi so I would draw mehendi on a groom’s hand and earn money. Dad ke boot polish karte the and I’d get 1 Rs 50 paise, so aese kaafi paise bach jaate the and by the end of the day I’d have lots of chillars (change). Par maza aata tha uss zamane mein dad ke boot polish karna.

4. Hrithik once cleaned the whole house, car for 10 days to buy a gray-nicolls cricket bat.

To earn my pocket money, to earn 30-40-50 Rs I had to show some kind of talent to my mom. Like sing a song and she’d give me 20 Rs and that’d become my pocket money. Another story is when Mom, my sister and I were in London. And I really wanted to buy this Gray-Nicolls bat, it was for 15 pounds. My mother said it’s too expensive we don’t have money to buy this. We were there for ten days. So, I said Mumma I will clean the whole house, I will clean the car, so every time I did something like this I would earn 1 pound. Like that, I earned the money and bought the bat.

5. Hrithik once threw 30 bottles from his terrace just to see them fly

Bachpan mein shararti tha main bahot, I was at my terrace, we were living on the 13th floor then. I used to love Superman, fantasy, superheroes. Suddenly I saw these empty bottles on my terrace, for the wonder of aeronautics and limitation, I wanted to see a bottle fly. So, I picked up one and I threw it, from the 13th floor I watched it fly. I enjoyed that so much I threw 30 bottles more. People downstairs started to go insane ki kaun fek raha hai, it was a big mess. And by the time I picked up my 31st bottle, a hand came from behind and stopped me, it was my father. I cannot express what happened after that. I was 8 or 9 then.

You can watch the episode of Kuch Hat Ke starring Hrithik and Mrunal here:

Super 30 releases in theatres near you on 12 July 2019! Catch the film and share your reviews in the comments box below. In the meantime, enjoy this romantic song Jugraafiya ft. Hrithik and Mrunal in Super 30 here.