Hum Tum And Them Trailer: Shweta Tiwari, Akshay Oberoi’s Series Is Everything But Usual

In Hum Tum And Them, Shweta-Akshay feature as two lost souls looking for a fresh start, but their kids from their past relationships add to the drama. 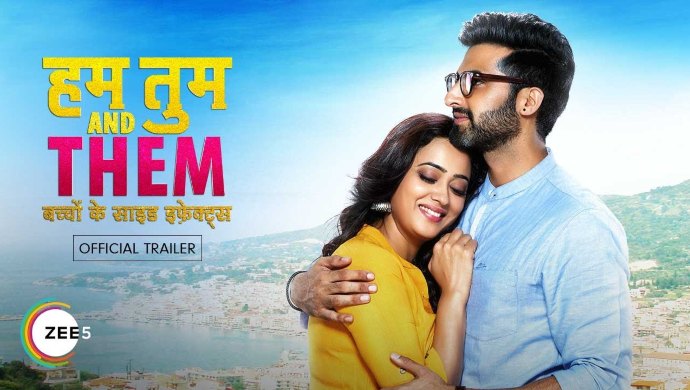 We are steadily approaching the end of 2019 and thus, ZEE5 and ALTBalaji are making sure we make the most of December. The OTT platforms recently unveiled the trailer of their upcoming Original, a family drama titled Hum Tum And Them. The web show marks the digital debut of television celebrity Shweta Tiwari, who is paired opposite the doe-eyed Akshay Oberoi. Aashika Bhatia, Bhavin Bhanushali, Gautam Ahuja and Trupti Khamkar make up the rest of the cast and will be seen playing important roles. Both Shweta and Akshay shall be seen playing single parents in a journey filled with highs and lows.

The poster shared earlier showed Shweta and Akshay standing in front of each other, while their respective kids peek from the other side of the door.

Revealing the twist in the tale, the trailer establishes Sahir Raza-directed Hum Tum And Them as an unusual story, far from mainstream romances. Not only is it the story of a couple, looking to begin their second innings of love and start afresh, but it’s their kids from their previous relationship who add a host of uncertainty. Shweta’s daughter is every teenager ever, while Akshay’s trio of children don’t welcome him into their lives and oppose the ‘new woman’ in their father’s life. Shweta and Akshay star as two lost souls who find solace in each other and get ready for a journey, leaving behind their past and staying hopeful about the future. But will they get a happily ever after? Watch the trailer below to find out:

Family is all about relationships and what makes it work is not giving up. “The first thing that caught my interest was the script. I’ve played the role of a mother before, but this is something that I’ve never done before. The sheer novelty of the show despite it being a family drama is what made me want to be a part of Hum Tum And Them. I hope this freshness appeals to the audience as well and the show goes on to be a huge success.”, says Shweta Tiwari about Hum Tum And Them.

Akshay Oberoi shared: “While every actor or actress in their career may get to play the role of a father or mother, not many would get the chance to portray this character with multiple layers. It was super exciting to play the character of Yudi, and knowing that this would improve my acting skills by leaps and bounds, there was no way I wasn’t going to be a part of this show. I had a blast working with the entire team and I am sure the audience will take a liking to the show as well.”

Hum Tum And Them is a family drama that showcases the pain that everyone goes through in maintaining perfect harmony in the house. It’s a story unlike any other you’ve seen, as two people who get a second chance at love almost lose it because they don’t feel they deserve it.

Excited to watch Shweta Tiwari and Akshay Oberoi in Hum Tum And Them? The web series starts streaming on ZEE5 from December 6, 2019 onwards.

Sharad Kelkar's Success Story: Journey From A Gym Instructor To A Sought-After Star