"I follow a strict diet and religiously work out. But Paras, Ankitta Sharma and all would then eat waffles, smoothies in front of me," says Angad. 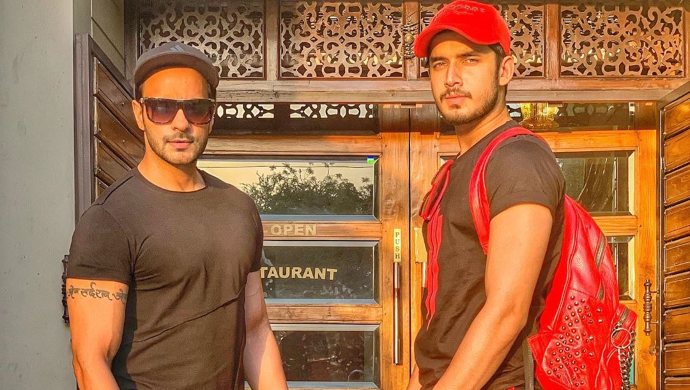 “We are a big gang now,” reveals Angad Hasija when asked about his bonding with ZEE5 Original series Ishq Aaj Kal co-stars Ankitta Sharma, Paras Kalnawat and Roshmi Banik. The television actor is best known for his works in Sapna Babul Ka…Bidaai, Preet Se Bandhi Ye Dori Ram Milaayi Jodi, Dilli Wali Thakur Gurls, Waaris amongst others. In an exclusive conversation, on his way to the shoot location of Ishq Aaj Kal season two, Angad reveals all about his digital debut and how he maintains his washboard abs despite being a hard-core Punjabi munda!

Read excerpts from the candid conversation with Angad here:

Q. How has the process of shooting been for your first web venture?

The shooting has been going on very nice. Ishq Aaj Kal is my very first web series. I had only done work on television until now. So, I got back to acting after a year because I wanted to do something different. Web series is what’s everyone’s watching right now, including my own family members. Shooting wise, it is very different, and now that I have tried it, the experience is very different. I am enjoying it a lot.

Q. What made you choose Ishq Aaj Kal as your first digital drama?

I liked Ishq Aaj Kal because I always wanted to play a Muslim character. I have always wanted to essay the role of an out and out Muslim character. Arshad’s character has a lot of shades to it like for instance he is a strict disciplinarian when he is at work but around his father the emotional side of him takes charge. He is a bit authoritative with his younger brother. When you’ll watch the second season, you will see Arshad bond more with his family.

You can catch glimpses of Angad as Arshad here:

See, basically, I am a Punjabi. Somewhere, it is a bit difficult for me to get under the skin of Arshad. Because I speak very fast, am very loud. This guy, on the other hand, is subtle, less spoken and speaks Urdu. These nuances are very difficult to ace. Otherwise, I am also a family-oriented guy like Arshad. We are both religious and uphold family values. I have also have a side-business, my family business of construction which I and my brother look into. There are a lot of similarities in that aspect because I am also very strict with my brother like Arshad but love him a lot.

Q. We hear you and your co-stars bring the house down on sets.

We are a gang now! We bonded really well in Manali. We used to stay together 24*7. I felt like I was back in college with Ankitta, Paras and all. We were like a bunch of teenagers who always had fun, we’d station ourselves in one room. We would always have dinner and lunches together. We even have a Whatsapp group, where we keep posting videos and pictures of each other. Paras had made this group, ‘Mitron.’ It doesn’t happen usually, but Paras treats me as his elder brother. He keeps giving me tips for hairstyling and all. It’s all these cute gestures that brought us all close. Speaking of hairstyling, the girls would get ready and be on the sets and Paras and I would still be getting our hair done. That is the level you imagine! *laughs*

We have next level masti on the sets. It’s like we are here to have masti and just shoot in between. The other day, someone spilled chocolate on Roshmi’s white outfit. Then we were covering it with talcum powder. The other day, poor Roshmi got ready and Paras dragged her out in the rain to ruin her hairstyle. So we keep having a lot of fun.

There are only so many times you take a trip with complete strangers and return with bonds for life. Shooting in Manali with these guys was that kind of experience. I had never expected to receive so much love and find such great friends on the sets. Ankitta and I share the same birthday, so my cousins who had flown in from Chandigarh and all of us had a party. Although we had an early call time the next day, it was fun. I have completed 13 years, these two are still new. Maybe they were expecting that I’d give them the ‘senior’ vibes, people do perceive on sets that I’d throw shade. But it’s never like that. Nobody talks to me if they see my Instagram profile *jokes*

Q. Since you are a Punjabi, we are sure you must have indulged in mouth-watering cuisines in Manali.

See, these guys don’t know what diet is. They eat all that they want, how much ever want. Poor me is on a strict diet always, I have abs and all, I have other shoots as well for which I have to maintain. I even keep a tab on my water intake and these guys would just keep ordering waffles, smoothies and shake late night. There are so many times Paras made me cheat on my diet because they’d sit in front of me and eat all this. I eventually gave in on so many occasions. He’d just keep saying, ‘Koi baat nahi healthy hai khaa lo.’

Q. Could you please elaborate on your fitness routine and diet for us?

I am very strict, I have a typical diet. Chicken rice, boiled eggs, proteins – I have been following my diet for a long time, seriously and religiously. I work out every day, no matter how late I pack up. If I am late on the sets, they know I am working out, otherwise, I am never late. Two hours before or after the shoot is a must for me every day. I can never miss my workout, it is as important to me as my work.

Q. You play a sharp businessman who is always dressed in formals. What’s your style like in real life?

I haven’t ever worn formals before in any of my shows. In real life, my style is very casual. When I was shooting, I was cautious that am I overdoing it? But when I saw the response, people told me on social media that it is a very different look, so I am happy. Every actor wants to be appreciated because a lot of hard work goes in. Touchwood, people continue to like even going forward. Initially, Arshad was to wear a tie and all. Then we toned it down thinking Arshad shouldn’t get lost behind all these clothes. At the same time, he is a dedicated Muslim guy who wears pathanis and all too.