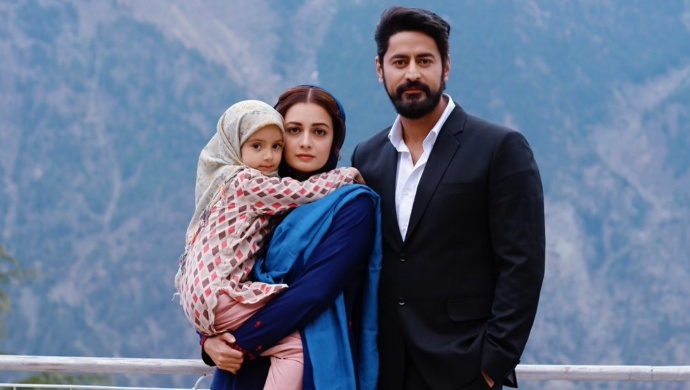 “Jail ki khidki ki salakho se jab main khule aasmaan aur pahado ko dekhti thi, toh mujhe wahi khula aasmaan aur pahad nazar aate the jo mere mulk mein bhi hai. Kudrat sabke liye ek hai. Insaan he lakeerein banata hai. (When I would see outside from the jail’s window, I’d find the same open blue skies and mountains that I’d see in my nation too. Nature is the same for everyone. It is us humans who create boundaries.),” says Dia Mirza towards the climax of Kaafir. With entertainment just a click away, binge-watch is a phenomenon more common than any other. Some shows you cannot get enough of and watch back-to-back episodes, others make you want to pause, sit with your thoughts and let the severity of all that you saw sink in. Kaafir, a ZEE5 original web series, falls in the latter category.

Directed by Sonam Nair, Kaafir is a tightly bound script beautifully and equally sensitively penned by Bhavani Iyer. As Dia rightly asserted, it is one of the most non-manipulative narratives that hit your conscience and touches the emotional core. Kaafir is a tale of cross-border struggle enveloped in many layers: love, sacrifice, freedom, nationality, religion but above all, humanity. Mohit Raina‘s Vedant Rathod is a lawyer-turned-journalist who gives up his law practice after an accused militant he fought for, becomes the cause of his younger brother, Veer, a decorated army Jawan’s death. But something about a five-year-old Seher Akhatar (Dishita Jain) propels him to reverse his decision.

Seher is the daughter of a Pakistani woman Kainaaz Akhatar (Dia). Her mother is a product of many odd circumstances: misogyny, injustice, rape, and the toughest of all, being forgotten by her own. In one of the scenes, Dia’s Kainaaz breaks down because the feeling of nothingness engulfs her all over. Freeing Kainaaz from the retribution is Vedant’s redemption, but all of their struggles are brought to a standstill after two revolting nations question: where do Kainaaz and Seher belong? Here is a saga of a righteous man, who despite losing a brother and his father’s respect, goes all out in sending Kainaaz and Seher back to Pakistan. Kainaaz, on the other hand, is a character so strong that she carved away for life even through the deep waters of two countries.

Throughout the web show, we see how the divide goes beyond the barbed wires, deeper into the hearts of the people who weigh every Pakistani and a terrorist on the same scale. We see Sonam’s direction touch upon delicate issues like the Indo-Pak conflict and moreover, the lives of those constantly escaping blasts: personally, socially, emotionally. Dia Mirza has opened up a pathway for all-new career innings as she breathtakingly gets under the skin of Kainaaz. She makes you cry, she makes you smile. She makes you think, she makes you question. Her pain is felt beyond the screens, her emotions arousing levels of empathy you wouldn’t otherwise experience.

Brilliantly supporting her is the backbone of Kaafir, Mohit Raina. As Vedant, Mohit exudes so much of power with his ever-so-kind eyes. Vedant’s strength arises from the silence he shares with Kainaaz, in the face of extreme circumstances. He is a man with nothing to gain from a woman who has already lost so much. Dishita Jain as Seher with her innocence and affable charm lights up our teary eyes from time to time.

Bhavani Iyer, take a bow. Huge applauds for never letting a scene slip away, maintaining the beauty and sensitivity of the script so organically. If not for Sonam Nair, we don’t know who else would have held the reigns of this promising plot? Yes, there are male directors who could have brought similar levels of emotions, but some simply deserve the feminine magic wand. Replete with excellent cinematography and dialogues that well evoke thoughts, the nuances and visually astounding appeal of Kaafir take the OTT game to a whole new level. However, the fact that producer Siddharth Malhotra had to wait for years before bringing this script to life, is another dialogue we need to open.