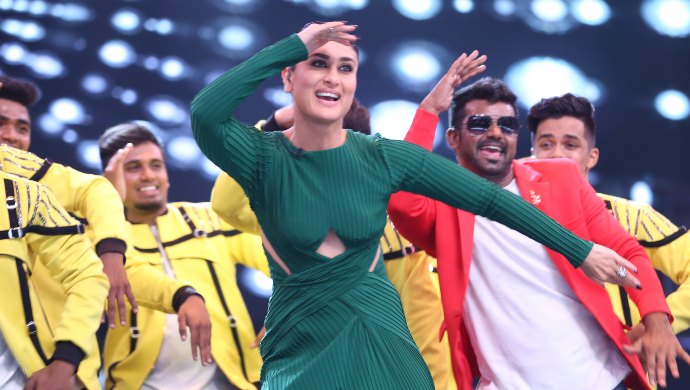 If it stars Kareena Kapoor Khan, it’s highly entertaining! Her debut on television with Dance India Dance 7 is no small feat and the actress is leaving no stone unturned in doling out treats for her fans one after the other. So much so that we are literally running of Tareefan for the Takht star. After revisiting her iconic dance numbers Mauja Hi Mauja, Chammak Challo amongst others, Kareena is set to recreate Saif Ali Khan‘s 90s chartbuster Ole Ole from the 1994 film Yeh Dillagi. After a blockbuster premiere, Bebo shall be seen shaking a leg to her husband’s evergreen dance song in the upcoming episode of Dance India Dance 7: Battle of the Champions!

Dressed in a forest green long-sleeved Tadashi Shoji couture, Kareena teamed the glamorous outfit with nude lips, Aquazzura heels and a sophisticated high bun. Trust Ms. KKK to drop it like its haute. The tinsel town diva has had a blast, as seen in the first two episodes of DID. She joined, hooted and cheered on for every contestant that took center stage and she continues doing so in the episodes to come this weekend.

Kareena will be seen joining Loyola Dream Team from South Ke Thalaivas on stage as they all groove to Ole Ole. In fact, at the end of the performance, she even claims to have danced better than her husband. “Saif se toh better dance kiya maine,” she says adding that she was in school when Yeh Dillagi had released. Check out glimpses of her super duper hit stint here:

Clearly, Kareena is having a gala time on DID. She even turned her small screen outing into a ramp as we see her sporting smokin’ hot looks in every episode. The Veere Di Wedding actress sizzled in a red Falguni Shane Peacock jumpsuit for the grand performance at Dance India Dance: Battle of the Champions premiere, followed by a stunning appearance in a bright yellow Stephane Rolland number. Watch her performance from the premiere here:

Add this green thigh-high slit gown to the list and we cannot wait to see what Bebo brings next to the table. All we can say is, other celebrity TV judges’ definitely gotta game up to keep up with this Kapoor!

Stay tuned for more inside scoops and exclusive pictures and videos from the sets of Dance India Dance 7.

Dance India Dance 7: Dheeraj Dhoopar's Fanboy Moment With Kareena Kapoor Khan Is All Of Us