Keeping with Kareena Kapoor Khan's style-high looks, Karisma Kapoor opted for a stunning shimmery pink number for her outing as a guest judge on DID. 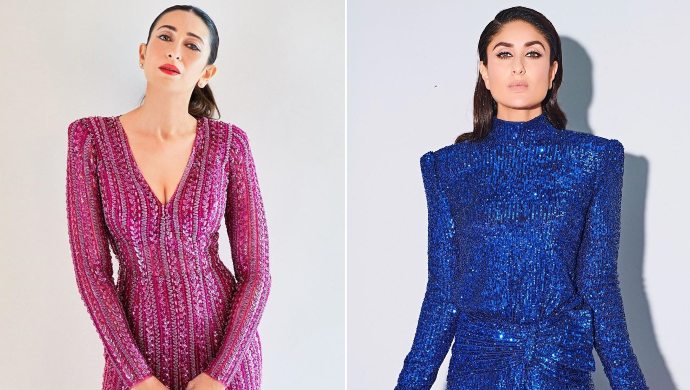 Forget the Kardashians, Kareena Kapoor Khan’s uber-fashionable outings as a judge on Dance India Dance 7 have been getting difficult to keep up with. The 38-year-old actress has been upping the style stakes, one outfit at a time. Kareena, who is juggling between the shoot of Angrezi Medium in London and Zee TV’s dance reality show in Mumbai, was unable to make it for the upcoming episodes’ shoot. Just when we thought we’d miss the beauty on DID, enter sister Karisma Kapoor. The elder sibling, Karisma, took it upon herself to fill in for her ‘gorgeous sister’ and shall be seen as a guest judge on Dance India Dance 7. Monsoon has disrupted the flight services which could be the reason for Lolo to step into Bebo’s shoes.

If it’s Kareena, it’s gotta be helluva stylish! Maintaining the sartorial supremacy established by Kareena as the best-dressed reality TV show judge till date, Karisma opted for nothing less than a drop-dead desirable look. Lolo wore an arresting shimmery number with a plunging neckline and a thigh-high slit (cue on Kareena’s latest style file). The ravishing creation is designed by Zara Umrigar while celebrity stylist Tanya Ghavri styled Karisma for her appearance. The most fetching part of the gown was its amalgamation of the pink and red hues, finished with bright red lips and Gianvito Rossi heels. Hair tied in a neat, middle-partitioned ponytail, little drama around the eyes and a nude palette rounded out the winning look.

Karisma took to Instagram on Wednesday and shared a few photographs from the sets of Dance India Dance. She captioned one of the photos as, “Filling in for my gorgeous sister as guest judge on @danceindiadance.official #danceiconspecial #dancekajungistaan.”

Besides Kareena, DID 7 also sees choreographer Bosco Martis and Raftaar as Kareena’s co-judges.

What Are Your Weekend Plans? We Recommend A Popcorn Bucket With Ranveer Sing- Sara Ali Khan's Film Simmba!

Ankita Lokhande's BF Vicky Jain Proposes To Her, Actress Replies, 'I Will Think About It'