In today's episodes, Tipsy is caught up in a nerve-racking situation between Karan and Palash. She is neither forgetting nor revealing her past. Why? 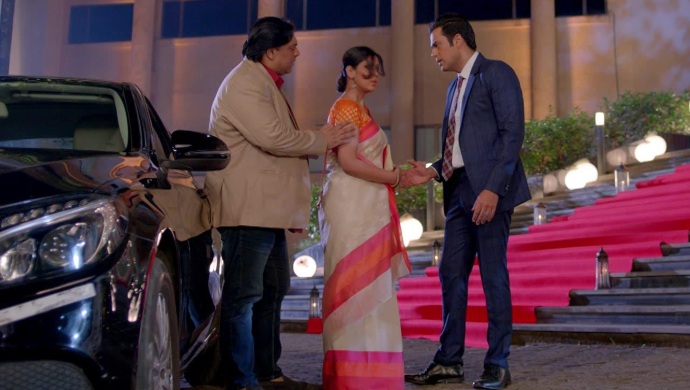 In the previous episodes, Karan and Vishal convince Amma and Chetti to stay at Tipsy and Sherry’s house under the pretext of being homeless. Tipsy falls asleep beside Karan and everyone misinterprets it as them having relations. Karan goes to sort the property dispute with Palash after the latter humiliates Radhika. Later, Tipsy gets a call about an emergency drug-overdose patient who turns out to be Palash. She saves his life only to be followed by him to an inauguration event!

In today’s episodes, at the inauguration of Tipsy’s new venture ‘Veda Rehab Clinic’, she walks away from Palash saying that she hasn’t forgotten her past. In a while, Karan enters amidst flashlights and media to light the lamp at the ceremony. Getting off the stage, Karan sees Palash and is furious as to why is he following him. He isn’t aware that Palash is there because of his desperation for Tipsy. Caught in an extremely nerve-racking situation, Tipsy runs out of the hall in a hurry.

Palash tries to stop her aggressively just as Karan arrives behind her in his car. Upon being asked by Karan multiple times before Palash, Tipsy replies, “I don’t know this man. Mr Khanna (Karan), please take me away from here!” Palash is dumbfounded at her response. Karan and Tipsy leave in his car while the latter is palpitating and turning pale. Karan lets her take her time and expects no explanation about the situation. Tipsy holds Karan’s hand tightly!

Karan gets slightly upset when Tipsy says that she can’t tell anyone about but him. While talking to Vishal at his home, Karan realizes that out of all the people in the world, Palash is Tipsy’s ex-boyfriend! Karan goes to meet Palash at the bar, who tells him that he has come back for Tipsy. He even met her at the clinic to patch-up because she is his first love and they dated for 10 years. By Karan’s words about Tipsy, Palash joins the dots that the former is the man who had sent her flowers at the clinic.

The next morning, Karan, Trisha, Amma, Chetti, Vishal, Sherry, and Tipsy have a flight to board. But Karan cancels it at the last minute because Radhika had broken down last night. While packing their bags, Tipsy confesses to Sherry that she loves Karan very much and that is the reason why she is unable to reveal her past to him. After wiping her tears, Tipsy and others reach the airport to wait for Karan. Vishal breaks it to everyone that Karan isn’t coming. Tipsy gets extremely restless and tries calling Karan’s phone incessantly!