In today's episodes, Tipsy falls asleep next to Karan at night and he hugs her. But later, she comes face to face with her patient-cum-ex-boyfriend! 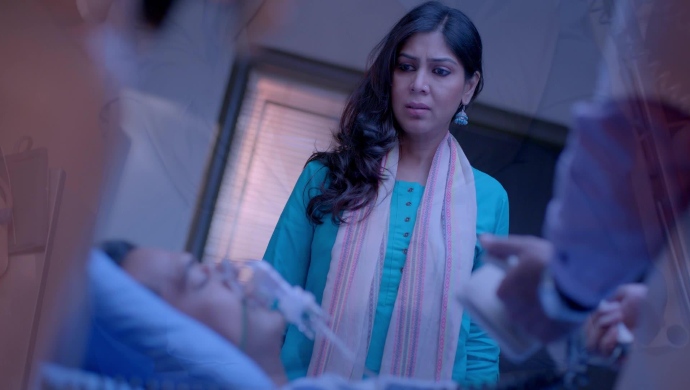 In the previous episodes, Tipsy had broken up with Karan she couldn’t bear the discomfort of seeing him and Radhika together. Vishal and Karan come to stay at Tipsy’s place under the pretext of being homeless. Then, Karan learns that his friend Palash is the lawyer who is denying Radhika’s right over Prabuddha’s house. At Trisha’s birthday party, Karan holds Tipsy’s hand in front of everyone to express his love!

In today’s episodes, Amma and Chetti are not at home which means an opportunity for Vishal and Sherry to sleep in the same room. Tipsy is against it but concedes in the end. Karan assures Tipsy that he will sleep on the ground and she doesn’t have to worry or feel uncomfortable. When Tipsy goes to cover Karan with a blanket, she falls asleep beside him on the same bed. The next morning, Vishal and Sherry witness this and think that some romance happened between them!

Suddenly, the bell rings and Romila enters to blow up the situation. Karan, Vishal, and Romila hide inside the bathroom when Anandan and his friend arrive at Tipsy’s place. Karan then rushes to Radhika because the lawyer had seized their new café-turned-boutique. Karan takes Radhika home because she starts palpitating. Karan then meets Palash to sort the property dispute and offers to pay any amount that he demands. But Palash refuses, saying that he cannot do it because it’s his job and he doesn’t have any reason to wake up otherwise!

Tipsy meets Karan and he hugs her emotionally. Suddenly, Tipsy gets a phone call about a drug overdose patient. She rushes to the hospital and is shocked to see that he is none other than her toxic ex-boyfriend Palash! His pulse is almost dead when she provides him with CPR (Cardio-Pulmonary Resuscitation) and revives him. Tipsy meets Karan and they go to her home. The former is completely lost in her troubled thoughts and shares everything with Sherry, who says that she should focus on Karan.

Palash enters Tipsy’s cabin to thank her for saving his life. But, the latter turns a cold shoulder to him, saying that it is nothing but her job. When Tipsy gets up to leave, Palash asks her why hasn’t married anyone yet. Just then, a bouquet from Karan arrives at her office and she replies to Palash that she had never found the right man, but now she has! Tipsy then goes to meet Karan but is unable to tell him the truth even after Karan asks her numerous times. Later, Tipsy goes to her new rehab centre’s inauguration and encounters Palash again.

Make The First Move Day: How Kumkum Bhagya, Mentalhood Tackled The Subject Of…