Kartik Shah, from international folk duo Maati Baani, tells us how he used his network of musicians to create a unique sound for State of Siege: 26/11 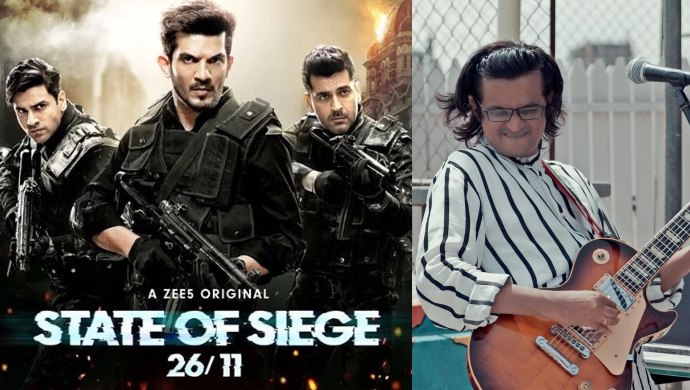 The State of Siege: 26/11 has an international flavour while being a distinctly Indian web series. This does not seem like a coincidence when you realise that the music throughout the series is composed by Kartik Shah. He collaborates with musicians around the world for his live act Maati Baani. He used his unique style and the wide network of musicians from around the world which include a glass harp player from Prague and a handpan player from Russia.

Watch a glimpse of his work in the first episode of State of Siege: 26/11 streaming for free on ZEE5.

So the composing that I do is different from the live project Maati Baani that I do. The thing that is common in between is just like with Maati Baani, I seek out unique musicians who play a lot of different instruments. I also work with musicians from other countries because I have been doing that since 2012.

Like I recorded a man in Prague who plays the glass harp, which is basically a man using his fingers to play music on wine glasses with water. I used that music for eerie scenes like when Kasab makes his first kill. Then there was also a handpan player from Russia. I have collaborated with musicians from Palestine and Japan as well for this show. It’s basically musicians from around the world collaborating to make a unique soundtrack.

2. Did you have any specific theme music for certain character on screen?

There was a theme music for whenever the NSG were on screen. It had to sound patriotic. On the other hand, we used eerie sounds for the terrorists. There’s an emotional theme that plays when we look at the aftermath of the attack. However, I have tried to avoid using themes to not take the attention away from the story. The music also tells a story but without overpowering the action or the stories on screen.

3. When it comes to showing Islamic terror, there’s a certain type of music we are used to hearing. Did you consciously try to avoid that in the series?

To be honest there is the Middle Eastern music you are talking about. That is only in the bonus episode I think it’s called “The Making of a Jihadi.’ That entire episode is based in Pakistan and their music is not very different from Indian music. So to make that episode sound different I had to use Middle Eastern music for Pakistan.

Apart from that I think we consciously decided to stay away from that stereotypical music. We’ve used more thrilling music to keep the suspense, and have the urban electronic sound.

4. How do you collaborate with so many musicians across the distance and do you have to defend your choices of musicians to clients?

So you have to have a plan in mind while choosing musicians too. These are musicians I have worked with before and what I do is I try to use their instruments in a different context. Like the glass harp player I used is the best in the world and he can really use his instrument in a way people cannot even imagine.

That’s what Hans Zimmer does too. He depends on his musicians to come up with unique tunes from the instruments they have and he brings them all together. That’s why all my shows sound different from everything else in India. I also got valuable inputs from Abhimanyu Singh, the creator of the web series. He is a brilliant music mind and can pick out specific instruments are not working.

Listen to the Harry Potter Theme- played on wine glasses on the streets of Prague! I wrote to Petr 3 years ago that i wanted to work with him and then on my recent trip to Prague, I saw him play to shocked audiences. Its hard to describe the difficulty to play this instrument, let alone make a sound out of a wine glass. If you visit Prague, surely see him play, something that you wont see anywhere on the planet. Indeed Petr is the 8th wonder of the world. Have a happy new year! Link in Bio. #Prague #GlassHarp #HappyNewYear #Wine #SongAndTheCity #talentedmusicians #brilliantmusicians #musica_delmundo #praguetoday #streetmusic #busker #praha #nemesti #bizarre #rareinstruments #beautifulinstrument

5. Have you composed for other shows before this?

I have composed for a lot of shows. I made the title track of Jhansi Ki Rani on Zee TV among other mythological and historic shows. I even did another web series recently and I am looking to do more web shows because they are willing to experiment and explore new ideas. Like no one paid attention to the background score earlier but with web shows people are paying more attention to what they are watching.

6. Did you feel State of Siege was the right project for you since it brings together an international director with Indian talent?

Kartik signs off saying that if you look at the end credits you will see list of most of the musicians he worked with on the show. Did this make you want to rewatch the show just to hear the music? Let us know which scenes from State Of Siege: 26/11 you loved the most in the comments below.

Get Live Updates on Coronavirus Outbreak on ZEE5 News.

#WorldHealthDay: An Unbiased Opinion On COVID-19 And The Current State Of Affairs In India

Tujhse Hai Raabta’s Reem Shaikh And Sehban Azim Play The 'Who's Most Likely To?' Game!