Pragya and Kiara reunite but Nikhil takes Kiara away. Meanwhile, Aliya suspects King of kidnapping Kiara. Abhi, on the other hand, is on his way. 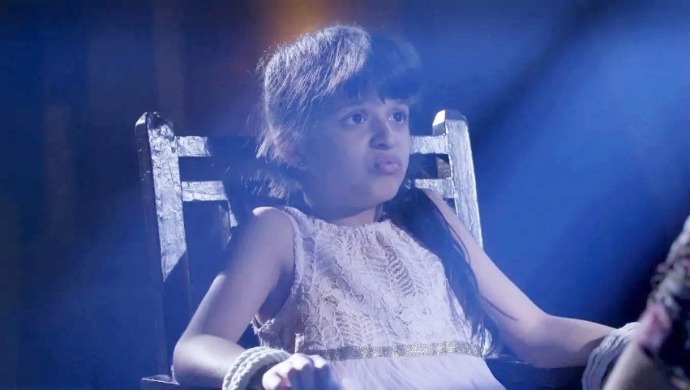 In Friday night’s episode of Kumkum Bhagya, we saw that Abhi goes looking for Pragya. However, his car breaks down on the way to Purani Haveli in Greater Kailash. Meanwhile, Pragya and Kiara find each other but are stuck on the opposite side of a fenced wall. On the other hand, Aliya walks in on King and Nikhil’s meeting and finds the latter’s voice familiar. The episode ends with Abhi taking a lift with one of Nikhil’s goons.

In case you missed the episode, watch it here:

Tonight’s episode begins with Aliya looking for Nikhil in King Singh’s office. Nikhil’s goon, on the other hand, drops him off in the middle of the road and calls his boss. He informs him that Kiara could be in Purani Haveli since Shetty aka Kiara’s Angel Uncle found the place to be apt for hiding the little girl. Nikhil and his goon plan to nab Kiara, Pragya, and Shetty before Abhi reaches the location.

Aliya starts questioning King that he is deliberately hiding Nikhil, the man who left his office. King asks Aliya if she is asking that he has something to do with Kiara’s kidnapping. Aliya tells King that he has become like Tanu and doesn’t see anything beyond his love for Pragya. King refuses these allegations and instead tells Aliya that she has gone mad. He tells Aliya that Pragya and Kiara were his family members who got snatched away from him. Aliya reminds King that his princess Kiara is her brother’s daughter and a blood relative.

King starts ranting about not being informed about anything related to Kiara. He recalls how he had to find out about her kidnapping through television. He assures Aliya that he only wants to see Kiara happy! Aliya apologizes for doubting King and they both hug each other. Of course, King was only pretending and he thinks to himself that he will take Pragya and Kiara along with him anyhow.

Meanwhile, Abhi tries to find the location and realizes that he is far away from Purani Haveli. Angel Uncle breaks the door and Kiara – Pragya reunite. But just then Nikhil’s men enter the place and start beating Angel Uncle. Pragya tries to save Kiara but all in vain. Nikhil beats Angel Uncle aka Shetty to death. Nikhil and his men escape with Kiara. Pragya falls unconscious after heavy logs fall on her. Abhi, Purab, and Disha reach the place but miss Nikhil and his guys.

Abhi, Purab, and Disha find Pragya. She informs them that she had found Kiara but the goons took her away. She tells Abhi that their little girl was crying a lot. Nikhil locks up Kiara again. He threatens her that if she tries to run away again, he will kill her mother this time. Nikhil asks his men to not double cross him and tie up Kiara. Meanwhile, Abhi tries to explain to Pragya that they both want the same thing – Kiara’s safety. He tells her that she didn’t have to come alone and things could have gone wrong with her too. He reminds her of the times when they used to fight together and win. And thus, they shouldn’t fight amongst themselves!

Pragya apologises to Abhi for not seeing his pain. She promises him to not leave him, and also won’t hide anything.

Kumkum Bhagya 12 March 2019 Preview: Will Pragya Find Out About Nikhil?