In tonight's episode of Kumkum Bhagya, Pragya finally tells King that she loves Abhi. A furious King reacts in an unexpected way. 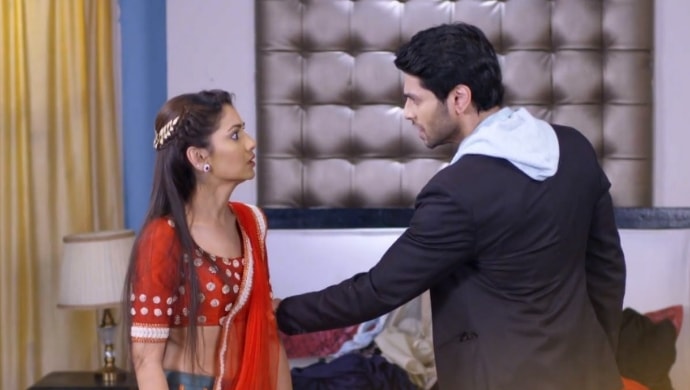 In the last episode of Kumkum Bhagya, we saw Abhi and Pragya come out of the mall hand-in-hand. Everyone is excited about their reunion except King Singh who is in love with Pragya, Tanu and Aliya. Tonight’s episode begins with an upset Tanu thinking about why Abhi chose Pragya over her. Meanwhile, Pragya leaves to tell King about her past with Abhi. Watch the video below to know how King reacts to her confession:

On the other hand, the Mehra residence is rejoicing over Pragya and Abhi getting back. A fun banter ahead of Neha and Tarun’s wedding leads Abhi calling Purab a joru ka ghulam. This then reminds Abhi that Pragya had asked him to speak to Tanu about their remarriage and he leaves to find her. Upon reaching King’s place, Pragya tries to explain the scenario to him but the angry rapper is in no mood to listen. He asks her to leave his house and life, both. King accuses Pragya of breaking his trust by hiding the truth. He turns down her apologies and reacts aggressively.

Pragya bursts into tears seeing King’s violent side who tells her that she has destroyed his life. He further tells her that despite his wish to hurt her, he cannot do so because he is in love with her. King reveals to Pragya about his plan of proposing marriage to her after Taun and Neha’s wedding. She, however, tells him that he is wrong in the first place to have fallen for her. He has broken their pact and understanding. This makes King even more furious who arm twists Pragya and tells her that she has no choice but to come to London with him. Pragya ends up slapping King because of his forceful behaviour.

The next scene brings an interesting twist because the heated argument between King and Pragya was a piece of his imagination. Pragya finally tells King that Abhi is her husband and that she is still in love with him. She apologises to him again and again for not confronting him earlier. She assures him that nothing will change between them and that they will remain friends forever. King thinks that confessing his feelings to Pragya will make her hate him and thus, decides to stay mum.

The episode ends with Pragya assuming the mangalsutra is for Neha, and tells King to give it to Tarun personally. She also reveals that besides Tarun and Neha, Abhi and Pragya are getting married too, again.

Keep watching this space for the latest episodes of Kumkum Bhagya now streaming on ZEE5.