In tonight's episode, Abhi reaches home and decides to catch the waiter who mixed Prachi's drink and find out the people who paid him. 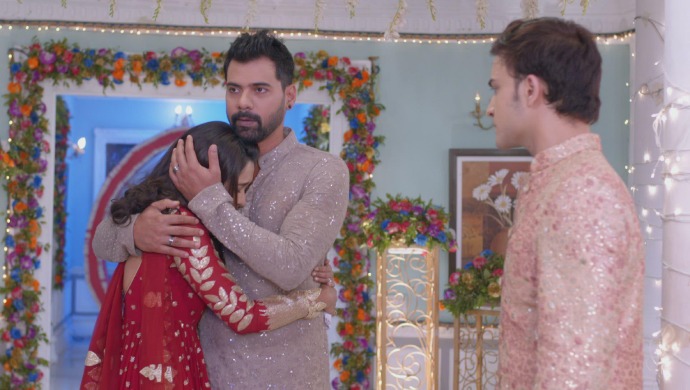 In the previous episode of Kumkum Bhagya, Prachi tries to explain what happened in the bedroom with Sanju. However, Aliya doesn’t give her a chance to explain herself. Rhea gets worried when Aliya tries to call Prachi’s mother and insult her too. Pragya doesn’t answer the call because she met Purab crying in his car. Shahana goes looking for Abhi when Priyanka stops her. When Shahana tries to call Abhi, Priyanka cuts the wire. Ranbir stops Prachi from being taken out of the house and defends her. He promises to prove she is innocent.

Ranbir realises that Prachi only slipped on the bed because she was dizzy. He says that the drink Prachi drank must have had something mixed in it. Aliya also admits Prachi’s story sounds possible but says prachi should definitely leave the party. Abhi steps in and stops Prachi from going till they find the culprit.

Rhea panics and goes upstairs where she meets Priyanka. Rhea tells her that Abhi is protecting Prachi and he is going to catch the criminals which is both of them. Rhea and Priyanka hope the waiter doesn’t give their names. Aliya congratulates Ranbir and Rhea for turning off the projector and later letting Prachi prove herself right.

Pragya takes Purab for tea and asks him why he is crying. Purab asks Pragya is she knows why he broke up with Disha. Pragya avoids Purab’s question because she feels he cheated on Disha. Purab asks Pragya if she trusts him. At the Mehra house, Prachi identifies the waiter who gave her the spiked drink.

Abhi catches the waiter and asks him why he tried to drug Prachi. Priyanka cuts her own hand to distract everyone. Rhea gives the waiter the knife. He holds Rhea hostage and escapes the house. Ranbir runs after the waiter but is unable to catch him. Will Rhea and Priyanka go without punishment? Stay tuned to find out.

Exclusive: Anshuman Malhotra Of Love Sleep Repeat: After Haider I Knew I Wanted…

Jamai 2.0 Fans, The Wait Is Over! Ravi Dubey-Nia Sharma’s Video…

Haiwaan Major Plot Twist: Randhir Fakes His Own Death To Stop Ansh And…