In tonight's episode, the smugglers hold Disha at gunpoint to steal the gold and leave. Purab sees this and tries to save Disha's life. 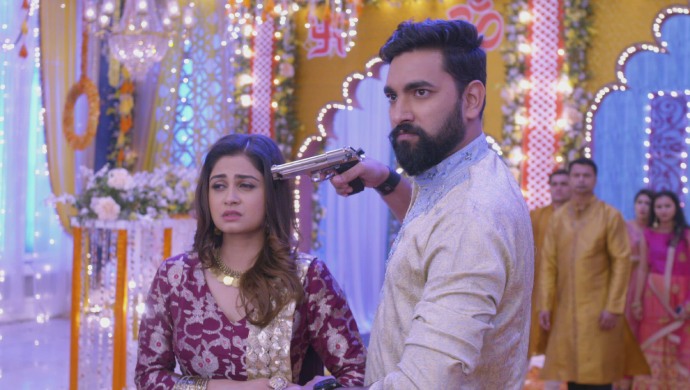 In the previous episode of Kumkum Bhagya, Mira overhears the smugglers plans threatening the pandit. She finds out their plan but gets caught by some of the smugglers instead. Disha enters Purab’s house with the CM’s team to see the Ganpati. Purab welcomes her but Disha says she wants to give him back the wedding ring he left at the hospital. Aliya sees Disha giving Purab his wedding ring back. Meanwhille Rhea lies to her friends saying she doesn’t love Ranbir and is using him to prank Prachi.

In tonight’s episode, The smugglers ask the pandit to start the fire. Mira wakes up in the room and finds the pandit’s daughter kidnapped too. She frees herself and promises to stop the smugglers before returning. She stops the pandit from lighting the fire. Prachi makes the wood in the fire wet to stop it from burning.

The kidnappers push her aside and the boss puts a knife on Rhea’s neck. Aliya takes a copper pot and throws it at the smuggler. Rhea saves herself and the family begin beating up the smugglers. The leader of the smugglers enters with a gun and points it at Disha’s head. He threatens to shoot her if they don’t get the gold.

Purab sees Disha in danger and gets angry. He warns the smugglers to leave Disha alone. The smugglers even threaten to shoot Purab. Abhi enters from behind and takes the gun away from the smuggler. Ranbir and Purab join Abhi in beating up the smugglers.

When Prachi and Shahana return home they see Sarita is back at home with her grandson. Prachi finds out that Sarita’s grandson also works at Abhi’s company. Disha also is shocked by Purab’s reaction earlier and knows that Purab still cares for her. Just then Disha hears her doorbell ring and assumes it is Purab.

Disha finds Hritik at her door. He asks her to let him stay at her place because his girlfriend kicked him out of the house. Aliya remembers everything Disha and Purab spoke about and how Purab showed concern for Disha. Purab tries to explain himself but Aliya says she understands. Will Aliya let Purab be with Disha? Stay tuned to find out.