In tonight's episode, Abhi and Ranbir fail to catch the waiter but they make everyone who said horrible things about Prachi to apologise to her. 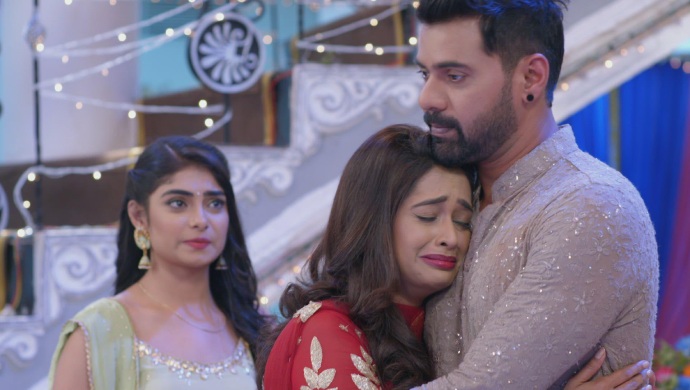 In the previous episode of Kumkum Bhagya, Ranbir allows Prachi to calmly explain what happened in the bedroom. They find out someone has mixed drugs in Prachi’s drink. Abhi also enters the house and tells Prachi he will find who is responsible for this. Pragya finds Purab crying and takes him for tea. Abhi lines up all the waiters and asks Prachi to identify the one who gave her the drink. Prachi identifies the real waiter and Abhi begins beating him up to find out why he mixed the drink. Rhea puts her life in danger to let the waiter escape.

In tonight’s episode, Purab tries to tell Pragya that he didn’t cheat on Disha. However, Pragya still chooses to believe Disha even though she trusts Purab too. Purab tries telling Pragya that Disha left him and now she is lying about Hritik too. Pragya asks Purab to do something that will actually win back Disha’s trust in him.

The waiter holds Rhea with a knife she herself gave him and escapes the Mehra house. Ranbir follows him and is unable to catch him. Rhea continues to cry and Aliya realises that Rhea has done something wrong in this whole mess. When Ranbir returns he asks everyone to apologise to Prachi.

Aliya refuses at first but Ranbir tells Abhi all the things that Aliya said to Prachi. In the end Priyanka and Dimpy both apologise. Aliya too apologises but says she doesn’t mean her sorry. Abhi asks Ranbir to drop Shahana and Prachi home. When they go outside, Ranbir meets Sanju.

Shahana and Prachi both ask Sanju when he is going back to Hoshiyarpur. Prachi says Sanju only came her to apologise to her for being a creep earlier. Ranbir sends Prachi to the car and books a ticket to Hoshiyarpur for Sanju. When he drops Prachi home she leaves his car without saying anything to him.

Abhi takes care of Rhea and tells him how Mira messaged him and stopped everything. He asks Rhea to take care of Prachi. At home, Prachi runs back down and meets Ranbir waiting there. She thanks him for helping her and he says he couldn’t see her crying. Will Ranbir realise his true feelings for Prachi? Stay tuned to find out.

EXCLUSIVE: Kundali Bhagya Actor Dheeraj Dhoopar: Karan Luthra Is An Extension Of Me