In tonight's episode of Kumkum Bhagya, Nikhil falls in a pond with Kiara. Their bodies are not found. Abhi-Pragya blame each other for Kiara's death. 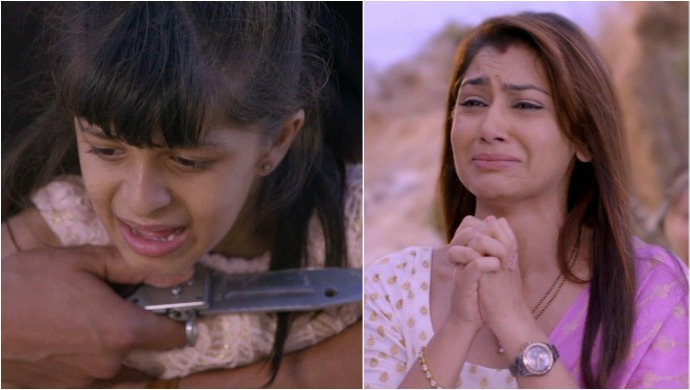 Last night on Kumkum Bhagya, we saw that Pragya tries to rescue Kiara again by paying Nikhil. However, she finds out that Kiara’s kidnapper is none other than Nikhil. Meanwhile, King and Nikhil stick to their deal. King helps Nikhil elope with Kiara and the money!

Tonight’s episode begins with Abhi chasing Nikhil. He threatens to kill Kiara with a knife and asks Abhi to back off. Just then King and Pragya reach the spot. Pragya spots police trying to get on the top of a small valley and she decides to follow them. Abhi tells Nikhil that they can sit down and have a talk. But Nikhil says there is no time to talk now but only for action. He threatens to throw Kiara off a cliff. Nikhil gets angry seeing police and laughs at Abhi for his stupid plan. Nikhil tries to hurt Kiara more and enjoys seeing Abhi in a distraught state over it.

Abhi begs Nikhil to let go off Kiara. He tells him that he is ready to give him whatever he wants. Nikhil then tells Abhi that all he wanted in his life was Tanu but now she loves him. Nothing can get Tanu back in his life. He tries to step back but Abhi tries to stop him. Pragya gets frightened seeing a knife across her daughter’s throat. Kiara is afraid too and asks Pragya and Abhi to save her. Abhi asks Ashish to do something, who in turn tells him to wait. Ashish points a gun at Nikhil, but Pragya tells her to keep it down. Abhi then snatches that gun and points it at gun. He tells Nikhil that he is very capable of shooting him and asks him to leave Kiara.

Pragya starts crying and tells Abhi that he is doing wrong by blackmailing Nikhil. Pragya asks King to intervene and convince Abhi to drop the gun. But Nikhil asks him to shut up! Abhi and Pragya start arguing over him shooting Nikhil. Meanwhile, Nikhil starts moving away and threatens to throw Kiara off the cliff. Ashish also tries to explain to Abhi to give him the gun. Abhi and Pragya get into a scuffle where she tries to get the gun from his hands. Meanwhile, Nikhil slips off and falls down with Kiara from the cliff. Both Abhi and Pragya yell Kiara’s name and start are shocked to see their little one fall in a deep water body.

Pragya falls unconscious seeing Kiara fall. Purab, Disha, and Aliya reach the location and find out that Kiara has fallen down. Purab, Disha, and Aliya try to console Abhi and Pragya. The swimmers go to search for Kiara but only find her shoe. A devastated Abhi holds the shoe and starts crying. Everybody breaks down! Purab asks Aliya to take Pragya home. Aliya asks a doctor to check on Pragya, who is still unconscious. He advises them to take her home and give her some rest. Aliya informs the doctor’s advice to Abhi and tells him that she is taking her home.

Pragya wakes up yelling Kiara’s name. The family members try to coax her and console her that this is what God wished for. But Pragya says it is her husband who stole her daughter away from her. Abhi is on a call with someone, crying, telling the person to get him his daughter back. He looks at her chain and goes back into the memory lane. Pragya is reminded of how events transpired. Abhi hugs her and tells her that their daughter has left for heavenly abode. Pragya tells Abhi that he is responsible for her death. She tells him that she was just his ego, but to her, her little girl.

Abhi tries to talk to Pragya and explain that he loved Kiara. But an angry Pragya tells him that he didn’t care for Kiara and didn’t give the prize money to the kidnapper. She tells him how Nikhil was telling them that he will kill her, yet he went ahead with his move. Pragya blames Abhi that she should have never gotten Kiara back to India. She tells him that it was her life’s biggest mistake to come back to him.

Abhi and Pragya start blaming each other over what happened to Kiara. Pragya tells him that destiny knew he wasn’t capable of being a father, whereas he tells her that she is the reason Kiara is not with him right now.