Rhea adds a powder to the food to make everyone sick, just so Prachi and Shahana have to leave her house. 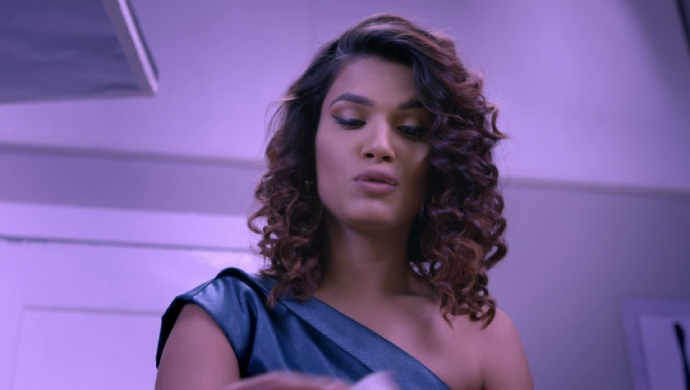 In the previous episode of Kumkum Bhagya, Abhi follows Pragya’s cab in his car. However, he loses track of her car and follows another car by mistake. Pragya also hits a dead end and has to turn back. She passes by Abhi’s car but he fails to notice her. Meanwhile, Rhea insults Shahana for being poor. Prachi confronts Rhea and shouts at her for making fun of Shahana in front of the guests at the party.

In tonight’s episode, Abhi returns home and finds Rhea upset. She is upset because Mira refused to make Prachi leave the house. Abhi asks Rhea what is wrong but she doesn’t repsond to his question instead she goes back to her room. Abhi finds out that it is because Prachi and Rhea had a fight. He laughs it off saying Rhea will be fine.

Later, Prachi and Shahana are seen talking to the waiters. They are discussing the plan for dinner. Mithali aunty plans to taste the food before serving it to the quests. Rhea hears their plan and considers how to ruin the dinner. Aliya finds Rhea and asks her why she looks upset. Rhea tells her about Prachi and Aliya tells her to get revenge on Prachi.

Abhi calls Rhea for a surprise where the asks Ranbir to sing while Rhea does the ramp walk with the rest of the family. When Rhea walks by the first time she steps of Shahana’s foot and walks back. the second time Shahana moves the carpet making Rhea slip. Abhi holds her just in time. Rhea sees Shahana is smiling right at her.

In a fit of anger, Rhea decides to do something that will force Abhi to remove Prachi from the house. She goes in the kitchen and puts a powder in all the dishes to ruin the food. She assumes that once Mithali aunty tastes the food it will be rejected after which Prachi and Shahana will be made to leave the house.

However, when dinner is to be served, Mithali is nowhere to be found. Abhi tells Prachi and Shahana to serve the guest food without tasting. Rhea is worried now because everyone will fall sick on eating the food. Will she correct her mistake? Stay tuned to find out.