In tonight's episode, Aliya finds out that Priyanka made the plan to put Prachi in trouble and warns Rhea to stay away from Priyanka. 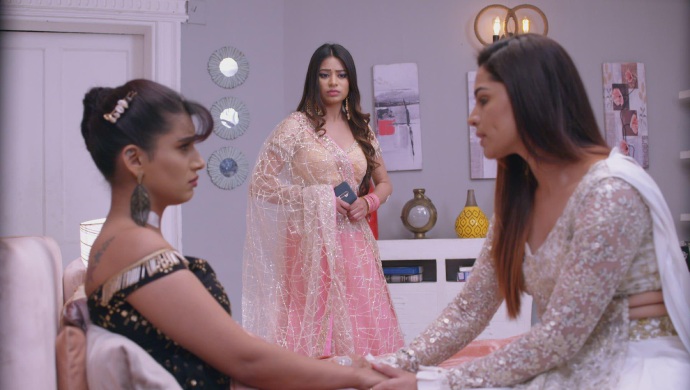 In the previous episode of Kumkum Bhagya, Purab tries to tell Pragya that he was not cheating on Disha. Pragya still chooses to believe Disha and asks Purab to win back Disha’s trust and if he wants to prove his love. Ranbir says he couldn’t catch the waiter. Abhi and Ranbir insist that that everyone who insulted Prachi earlier apologise to her now. Dimpy, Priyanka and Aliya all are forced to apologise. Abhi tells Rhea that Mira told him in time so he was able to save Prachi. Aliya sees Priyanka with Rhea and understands they have some plan.

In tonight’s episode, Abhi leaves Rhea’s room after while Aliya walks in. She asks Rhea who gave her the plan to mix drugs in Prachi’s drink. Aliya already doubts Priyanka and warns her to stay away from Rhea and keep these dirty ideas out of her mind. Aliya warns Rhea to stop following Priyanka’s advice.

When Aliya leaves the room, Priyanka goes next to Rhea. She tells Rhea that is she doesn’t act soon Prachi will steal Ranbir away from her. But Rhea tells Priyanka to leave the room. Abhi goes and thanks Mira for messaging him about the trouble. He tells someone apart from Rhea is targeting Prachi and he thinks it is Priyanka.

Prachi tells Shahana that she feels guilty for thinking Ranbir is a bad person. She decides to apologise for being mean to him for so long when they meet in office. Prachi calls Pragya and asks her to come back home since she misses him. Rhea meets Ranbir who convinces her that he still thinks Prachi is a real pain.

Ranbir says he would have done it for any other girl too and asks Rhea to not get jealous. Prachi tells Pragya that there was some problem at the party but Mr. Mehra cleared it out. Prachi goes to sleep in Pragya’s lap. Pragya texts Mr. Mehra thanks for helping out. Will Abhi realise Prachi’s mother is Pragya? Stay tuned to find out.

International Men's Day: 5 Role Models From TV, Films, And The Web For Man Of The Moment