Tonight on Kumkum Bhagya, Abhi-Pragya find out about King's plan to take Kiara to London. Disha, Aliya ask Abhigya to separate, keep one twin each. 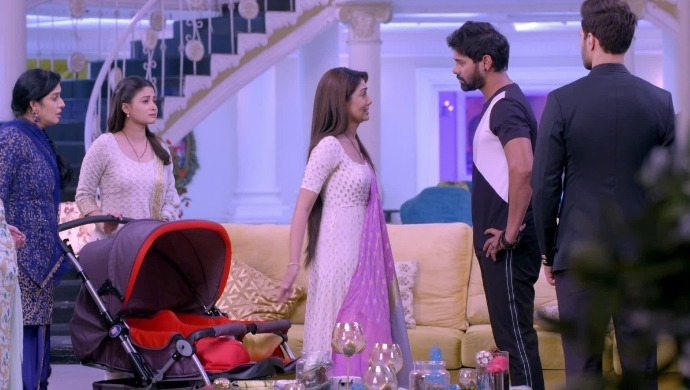 In the latest episodes of Kumkum Bhagya, we saw that Kiara and Nikhil are dead. Abhi and Pragya hold each other responsible for their daughter Kiara’s death. Pragya blames Abhi that she should have never gotten Kiara back to India. She tells him that it was her life’s biggest mistake to unite with him. A hurt King is listening to Abhi and Pragya fight standing in a corner.

Check out what happens tonight here:

Tonight on Kumkum Bhagya, the episode begins with Abhi yelling at Pragya. He tells her that despite him asking her to not give Nikhil the ransom money, she did it anyway. He revisits his Dadi’s death when he had asked Pragya to refrain from her actions but she didn’t and he lost his granny. And again because of her adamant behaviour he has now lost his daughter. Abhi asks Pragya if her approach got them their little girl, because at least his way of handling the situation gave them a hope of seeing Kiara again. Purab tries to intervene and stop them but Abhi doesn’t listen.

Pragya accuses Abhi that she is the one paying for his deeds ever since they got married. Because he got Tanu in their lives, who got Nikhil along. She tells Abhi that he should have removed Tanu from his life long back. Abhi hits back at her saying it is her fault because she couldn’t separate King from their lives. She justifies that King has been in Kiara’s life since the day she was born. He has been there for her and for Kiara when he wasn’t. In fact, even after meeting Abhi, Kiara used to call King her ‘Dadda’ justifies Pragya. Abhi asks her to shut up and reveals that King was helping himself and not her in rescuing Kiara. He tells Pragya about King’s deal with Nikhil. Abhi also divulges the part of King’s plan where he had decided to fly to London with Kiara.

King tries to refuse these allegations but Abhi tells him that Disha had overheard his conversation with Nikhil. Pragya asks King why he decided to take revenge on them and why he acted to help them? King admits his mistake but denies that he had any role to play in her passing away. He tells Pragya how much he loved her, and that ever since Abhi came back in her life, nobody told him anything about his princess. King even accuses Pragya of betraying him after she met Abhi again. He even reveals his plan of proposing to her for marriage, but she told him about Abhi and he stepped back. King further tells Pragya that everything would have gone as per his plan, he’d have taken Kiara to London after giving Nikhil more money. And that she’d have followed them too. Pragya slaps King and asks him to leave them alone.

But it wasn’t King’s fault alone, Pragya tells Abhi. Tanu also had a role to play, and she blames Abhi for bringing Tanu in their lives. Pragya tells Abhi that she cannot stay with him because if she does, she won’t be able to forget Kiara. If she is unable to forget Kiara, she will die and she cannot die because she has her twin daughters to take care of. Pragya says that Kiara is the reason for Abhigya’s split. She adds that she cannot spend the rest of her life with her daughter’s murderer. Abhi says even he cannot get it out of his mind that the person who kept him away from his little one for 7 years is the one responsible for her death.

Dadi, Dasi, and others try to make Abhi-Pragya understand and not talk about these things. Pragya goes upstairs and gets the twins from their room. She informs everyone that she is leaving the house with her newborns. Abhi says they are his daughters too and she cannot take them away. Pragya tells him that after what he did to Kiara, he doesn’t deserve her twin girls. Abhi argues that the twins are safer with him than with her. Abhi asks Pragya how much money she wants to leave the twins with him. Pragya argues how can he evaluate what their twins are worth when he couldn’t give money to the kidnapper and save Kiara. Abhi says he will fight for the custody of their twins if need be.

Disha intervenes and tells both Abhi and Pragya to stop arguing. They both say they cannot stand each other’s presence. Because it will remind them of how Kiara died because of their respective actions. Abhi and Pragya call each other’s Kiara’s murderer. Pragya says she will leave the house with the twins because she will choose death over staying with him. But Abhi says she never dies, it’s his family who dies, first Dadi and then Kiara.

Kumkum Bhagya 18 March 2019 Preview: Pragya Leaves Delhi With One Of The Twin Girls