In tonight's episode of Kumkum Bhagya, Pragya and Abhi plan to stay away and only let their lawyers fight the case. But Pragya steps in to save Rishi. 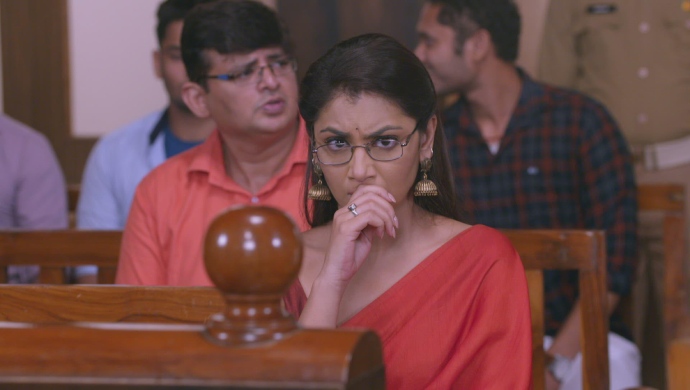 In the previous episode of Kumkum Bhagya, Aliya finds out that Priyanka had convinced Rhea to get rid of Prachi. She asks Rhea to stay away from Priyanka. When Aliya leaves, Priyanka tells Rhea that Ranbir is in love with Prachi. Rhea asks Priyanka to leave the house. When Prachi goes home, she calls Pragya home too. Prachi also feels bad for being mean to Rishi. Ranbir tells Rhea that he is not in love with Prachi. Pragya finds out that Mr. Mehra helped Prachi at his house and texts his thanks.

In tonight’s episode, Abhi gets a thank you message from Pragya. He wonders why she is telling him thanks. Later, Purab enters Abhi’s room and tells him how Disha and Aliya are both upset with him. He says Aliya is angry because Purab reached home after Abhi did.

Abhi’s lawyer offers to settle Rishi’s case outside of court. Pragya refuses saying that Rishi deserves justice and his self-respect. Abhi and Priyanka reach the court too where the meet Abhi. Pragya and Abhi notice each other and walks towards each other. Abhi tells Pragya that they will leave the problems in court itself.

Pragya and Abhi both decide to get done with this case on move on in life. Priyanka offers Rishi one more chance to marry her but he refuses. In court, Rishi’s lawyer tries to claim that Rishi was molested and not Priyanka but everyone laughs at it. Priyanka’s lawyer cooks up a false story and shows photos of wounds on Priyanka’s face.

Pragya realises Rishi is losing and asks the lawyer to talk about the police station. Aliya sees Purab talking on the phone and cutting the call when she walks by. She asks him who he was talking to. Purab admits he went to meet Disha, but Aliya doesn’t believe him again.

Abhi testifies that he didn’t call Rishi to his room. The lawyer then proves some of Priyanka’s wounds came after the day she claims she was attacked. The lawyer adds to his defence that when Rishi was in jail, Abhi beat him up. Abhi is surprised that the lawyer knows about this. Will this ruin his relationship with Pragya? Find out tomorrow.

Exclusive! Priyal Gor Says Shooting For Love Sleep Repeat Was Like A Paid…