Pragya and Prachi are kicked out by Chachi ji. They go looking for a place to stay at night. 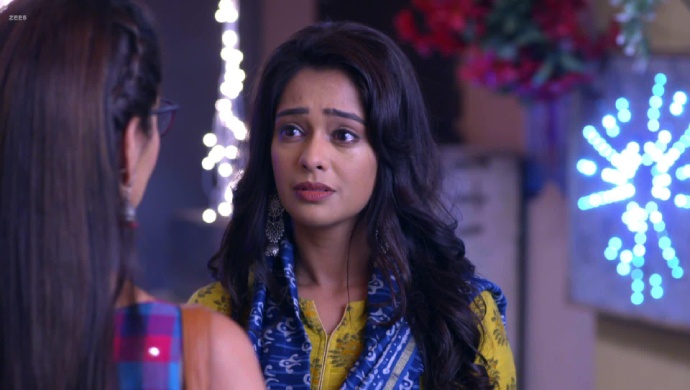 In the previous episode of Kumkum Bhagya, Rhea feels insulted in college after Prachi slaps her. She swears to ruin Prachi’s life. When Rhea goes back home, she finds out that the security expert sent the security footage of the party. She is scared that Abhi will watch it. Just before Rhea is proved guilty, the CD stops playing. Prachi’s aunt finds out about Prachi being arrested. She asks Pragya to scold Prachi. Pragya refuses to do that.

Pragya tells them to not run away from their problems. She tells them that they will stick together and face all their problems. Just then a shopkeeper offers to show them a home that has low rent and no deposit. Pragya agrees to see the house next morning.

Rhea who is sleeping in her room is having a bad dram. She imagines Abhi finding out that she is the real culprit. Prachi who is the innocent victim now shames Rhea for robbing her own necklace. Abhi even slaps Rhea and she wakes up screaming.

Abhi hears Rhea and consoles her about the dream. Mira also comes in the room telling her to not worry and go off to sleep. The next morning Mira tells Abhi that Daadi too didn’t sleep all night. She tells him to make Daadi feel better. Abhi realizes he hurt Daadi by saying that Pragya was not at the temple nor was she in Delhi.

Pragya takes Prachi and Shahana to the new house with the landlady. The room is badly maintained and is very unclean. The landlady tells them to clean the house up if they want to live there. Shahana is angry but Prachi and Pragya convince her that is good. Stay tuned to find out how the adapt to their new house.