Rhea decides to get rid of Prachi for good. She convinces the Principal to suspend Prachi. 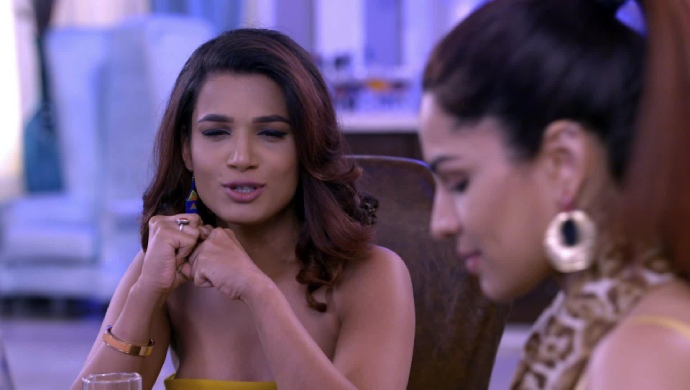 In the previous episode of Kumkum Bhagya, Aliay finds out that Rhea mixed something in the food. She realizes people will fall ill. So she puts the blame on Prachi’s food quality. She threatens to get Prachi arrested. However, Abhi tells Prachi to leave his house and never return. He later tells Daadi that he only send Prachi away to stop her from going to jail. However Prachi is upset that she disappointed Abhi for the first time.

In tonight’s episode, Prachi is afraid of going to college. Shahana tries convincing her to go to college. Pragya hears that Prachi doesn’t want to go to college. Prachi and Shahana tell her everything that happened at the party. She also tells Pragya that she is scared that Rhea will spread rumours about her in college again. Pragya tells Prachi to face her problems.

Rhea is happy in the morning but Aliya reminds her that she will meet Prachi in college. To deal with Prachi, Aliya asks her to spread news of everything Prachi did at the party. She makes up a plan to get Prachi suspended from college.

When Prachi goes to college she is happy to find people who are ragging her about what happened at the party. Ranbir stops them from making fun of Prachi. He sees Prachi crying and running away. He follows her and stops her from crying. Rhea sees this and gets jealous.

She decides to follow Aliya’s plan. She goes to the principal to complain about Prachi. She tells him that Prachi served bad food that gave everyone food poisoning at her party. The principal then calls Prachi to his office. There he tells her that he heard everything that happened at the party last night.

He tells Prachi that Abhishek Mehra is a trustee of the college and he has asked for Prachi to be suspended. Prachi is shocked. She tries to ask the principal to change his decision but he asks her to leave. Rhea hears this and is happy. How will Prachi react to being suspended? Stay tuned to find out.